For the most part the fishing has been OK. We have been averaging 2 or more sailfish per day with our best day at 6. We have also caught a sailfish on every single full day trip but one. The one we didnt catch one was frustrating for me as I had one of my favorite and long time customer, Alan, for a one-day trip. He has been fishing with me for years and just 2 years ago we ended up catching 14 sailfish in one day. The conditions on the day we went out this year though just werent very good. The very next day we ended up catching 6 out 8 sailfish but the conditions had drastically changed for the better. That day we were also in a tournament and those 6 sails put us in third place and we won a second place daily. The following day (Day 2 of the tournament) the bite slowed down and we caught 2 out 3 sailfish that day and we ended up in 6th place overall. In tournaments every fish counts, and the third fish that we lost, if we would have gotten it, would have moved us into 2nd place and kept us their until the end. We still had fun and won some money as well.
I also had an editor for a German Fishing Magazine (Global Angler) come out and fish with us for a two-day charter. Luckily we ended up catching 5 out of 8 sails and he got some awesome pictures, video and some great underwater video as well. Besides those trips we have done a mix of half day, ¾ days and full day trips and also had some cancellations.

Other than sailfish, its been a bit slow, but lately we have been catching some decent mahis up to 30 pounds and some kingfish as well. There have been cobias on the rays in Hawks Channel, but we really havent spent much time in there looking for them. On the swordfish front, we did 2 drops for swords with the editor of the German fishing magazine and we didnt get any bites so we went in to catch some sailfish for his primary story. We only swordfished for 2 hours or so, so we didn't give it enough time, but I did talk to some guys that went out in the past few days and some have had luck and some did not, although one boat did catch 4 swordfish in one day. If the weather is right and you put forth a full day, I am pretty confident you will get a few bites and catch a fish.

Next week is the Miami Boat Show and although I am fairly booked up, I do have two open dates during the show. So if you are coming down, give me a call and lets go catch some fish. 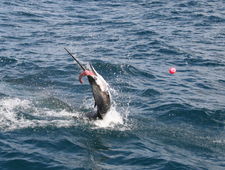