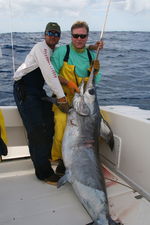 The last two weeks have been almost the same as the previous report with us splitting our time between swordfishing mostly during the day and sailfishing on the reef.
Starting with the swords, the daytime sword bite continues to produce lots of quality fish, mostly between 180 and 280 pounds. On the average we have been catching about 2 fish per trip although we did have one daytime trip were we caught five swordfish in one day, but we also had one 12 hour combo trip where we had three bites in the day and one bite at night but didnt land any. That combo trip started at noon and we had three daytime sword bites that we couldnt get tight on. We started the night trip and about an hour after it got dark, we hooked a fish on the short jug rod. It was fighting like a decent fish and as the angler was doing a great job in the harness, a HUGE mako shark shows up. This mako was easily 600 to 750 pounds. It swam right to the boat to check out the commotion. It showed no fear and stared at us with its dark sinister eyes. It was so close that you could reach down and touch its back. Seeing the shark, my first thoughts was that if the fish we were currently fighting was a swordfish, then the fight wasnt going to last long as that mako could have easily eaten a swordfish of practically any size. As it turns out the mako left and what we hooked and later caught happened to be a big hammerhead shark. The rest of the night produced one more sword bite that we missed, but all was not lost as we took the same angler out the next day and caught him a beautiful 180 pound swordfish during the day.

The sailfish bite has been pretty decent as well. We have caught at least one sailfish on every trip we had and our best day we caught six. A few weeks ago we had a run of very small juvenile sailfish of 10 to 20 pounds. These fish seemed to have moved through and now we have the normal size sailfish of 40 to 60 pounds. During the last two weeks the weather has been anything from rough to flat calm. The best days sailfishing were when it was rough but we also had a flat calm day were we caught 3 sailfish as well. Besides the sailfish there have been some decent dolphin on the edge as well as some kingfish. We did catch some kings in the 30 pound range. Making an early showing have been some cobias. We caught a 30 pound cobia on the kite while fishing the edge and a friend of mine caught some cobias while sight fishing for them in Hawks Channel.

As you can see the season is starting off strong and we have plenty of dates open for sailfishing, swordfishing or whatever else you may want to try. December is holiday time as well and I still have some open dates between Christmas and New Years. This is a very popular week and usually books well in advance. If you have friends or relatives in town or you are coming to Miami for the holidays and want to go fishing give me a call so we can reserve that date. Another popular item during the holidays is a fishing trip gift certificate. If you have someone special and dont know what to get them, a fishing trip on the Double D is the ticket. If you need more info please send an e-mail or give me a call.