Is it Summer Yet?

The weather has really dictated the type of fishing we have done in the past few weeks. To start, we did a 3-day trip to Bimini. The entire week before our trip the wind was howling and I was really praying that the wind would calm down enough to allow us to hed across. The day before the trip the wind let down some and we managed to get to Bimini without getting pounded. Once on the island we decided to do some bottom fishing and some deep dropping. There was still too much wind and leftover seas to try to hunt for the tunas. The deep dropping was fairly good with queen snappers, and yelloweyes. The second day we headed to the Gingerbreads for some yellowtail fishing followed tuna fishing. Well the weather had different plans for us. On the way to the Gingerbreads, the seas on the Bahama Bank were calm until we hit a squall line with 40 plus mile an hour wind. The wind went from the east to the west and once we anchored we had the wind opposite the tide, which makes yellowtail fishing very difficult. We overcame though and fished for the yellowtails on the bottom and did well. Wouldnt you know it though, when the tide switched and now we should have the tide with the wind, the wind switched as well and we had wind against tide again. We continued fishing and soon had the box full and the anglers sore. With more squalls on the horizon, tuna fishing was out of the question, and we ran back to Bimini and did some more deep dropping. The third day was the nicest of all days and we trolled up front for blue marlin and then ran back to Miami looking for mahis. We found a nice line of floaters about 30 miles out and ran into a few big mahis and managed to catch almost all of them. The mahis were 20 to 30 pounders and that certainly is a lot of fun on spinning tackle.

Back in Miami, we have also done some fishing on the edge and overall it has been very good. We did have one slow ½ day with threatening rain and lots of wind, but even then we caught a few fish. Most of the other trips were good though. We had a half day where we caught 3 sailfish as well as some kings, had a father and son half day where the son caught a big king and a big blackfin tuna and had another half day with 2 sails, some bonitas, and a few kings. So overall the fishing on the edge has remained productive so far this summer.

As you can see from the report though, the weather this summer has been challenging. June was filled with lots of wind especially the last part of June when the wind was blowing consistently at 20 plus knots. July has been mostly filled with lots of rain. Summer time in South Florida usually means flat calm conditions and the possibility of afternoon thunderstorms, not rain all day and heavy wind! Finally though the weather has cleared and this weeks forecast is looking awesome. It is actually one of the first weeks when we will see glass calm conditions and sun. This should make for great conditions to hunt for mahis in the Gulfstream, look for tunas in the Bahamas and also enjoy some great swordfishing either day or night. Take advantage of the weather as I do have openings this week and next. I am also convinced that the weather pattern will stabilize and we will see calmer days and better fishing as well. 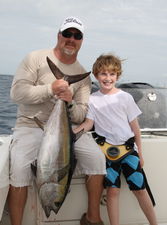