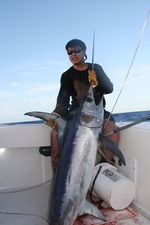 In the past week or so we have done a couple of daytime sword trips, a few dolphin trips and a trip to Bimini. Starting with the daytime swords, we had one customer for three days that really wanted to catch a swordfish. He was from California and swords are a rare catch over there for rod and reel anglers. Some are caught by the harpoon boats but to even see one for a sportfisherman is rather rare.
We set out on our first trip. We had a bite on our very first drop, but didnt stay connected. After 4 or 5 more drops we had a bite and this one stayed on. We landed the fish which was 70 inches from lower jaw to fork and weighed in at around 180 pounds. It was our customers first swordfish ever and he was extremely happy. We stayed out a bit longer, but no more bites. On our second trip, the winds had kicked up quite a bit, and although it was fishable it wasnt great conditions. We went all day without a bite. We had put our dues in, fished hard all day, and nothing is more discouraging than when you dont even get a shot. We were set to go a third day, but the wind hadnt let up so my customer decided to postpone the trip and do it again when he comes back to Florida in the fall, which is also a great time for daytime swords.

As I mentioned, we also had a two day trip to Bimini. I have fished with these clients for many years and every year we hed over to Bimini in June for the mutton snappers. So far we have always had great weather, but the same wind that hampered our day sword trips was still around. My clients had one family member from out of town and had commitments for most of the summer, so everyone elected to brave it out and go across. The crossing wasnt terrible; we just had to go slow. Instead of a typical crossing of an hour and a half, we made it to Bimini in 2 hours and 45 minutes. After clearing Customs and checking in the hotel, we had lunch and then headed out to fish for the muttons. We caught one mutton right away and then it slowed down a bit. In my opinion the best time to fish for muttons is between 4:00 and 7:00pm. Right around 5:00pm the muttons started biting good and by 6:30 everyone was worn out and we headed back to shore. The next day we wanted to go to the Channel and look for the yellowfin tunas, but the wind was still up and it would be a challenge to find them. Instead we stayed in the lee of the islands and ran south towards Beach Cay where we set up for some yellowtail snapper fishing. At first there was not one yellowtail in sight and to make it worse the current was going the opposite way of the wind which makes yellowtail fishing very difficult. I moved to a different area and although we didnt get the yellowtails there we had a lot of fun with big cero mackerel. I made a third move and after a while we got the yellowtails going. The wind was still opposite the current, but we did the best we could and caught some fish. On the way home we caught a few dolphin to add to our catch.

Prior to the sword and Bimini trips I did have a couple of trips for mahis. We had good weather and caught fish on both trips. The first trip we caught 35 mahis and all were keepers. The second trip we caught about 30 of them but only half were legal.

As far as future trips, we still have one more full moon left for the muttons in Bimini and I do have open dates. The full moon is July 26th so anytime around that will be good for those snappers. The rest of the summer the yellowtail fishing should be awesome as should be the fishing for the tunas.
Summer is also a good time for day or night swords, especially since the weather is so calm. We caught a lot of swords in past summers and if you dont enjoy fishing in the hot sun, then night swordfishing in the cool evenings may be your thing.
There have been plenty of dolphin around, albeit the schools have been mixed with a lot of small fish mixed in with legal fish. As the summer progresses though, the dolphin should grow in size and most of the schools will have bigger fish. For beginners to the very experienced, dolphin fishing can be a lot of fun.

There are a lot of options open for fishing in the summer. There is also no oil anywhere near South Florida and none is forecasted to make its way into the Atlantic. Enjoy the 4th of July Holiday and stay safe. Give me a call and lets set up those summertime trips.