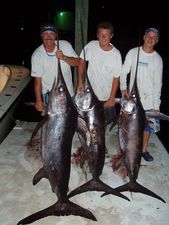 My last sword report was pretty good as we had a great night catching those big fish. With that in mind, I wasn?t expecting to get that lucky again anytime soon. We had some good nights since then averaging anywhere from 1 to 3 fish a night, with our largest at 100 pounds. We did have a night we caught 4 fish (all small and released) and we also had a night were we only had one bite that we managed to miss.

But that all changed on Friday night. I have a great client who hires my boat and sends his son and 2 or 3 of his friends with him. These boys are all in high school and love to go swordfishing. I call them the ?Sword Boys?. Another thing about this boys, is not only are they very good fisherman, but they have luck.

We started out catching bait and then heading to the sword grounds. With good weather, we got out there quick and had our spread out by the time it got dark. Just as it got dark, our long jug gets hit and line starts coming off the reel. One of the boys got on it, but after about 5 minutes the hook pulled. The leader was all wrapped up, so it was apparent that the fish was just fouled in the leader. We were getting ready to get that bait back out, when one of the other lines gets whacked and lines starts coming off the reel at a good rate. One of the other boys jumps on that one and the fight begins. Seconds later the front tip rod gets annihilated, the rod bends over hard and within seconds a big sword clears the water right next to the boat. Now we have a double-header going and both are nice fish.

The fish that first jumped, jumps again, but this time it cleared the water by at least 10 feet. I have never seen a sword jump so high. This was one wild fish that was just screaming line in every direction, including a few times where he went under the boat, and came around the other side. After a few minutes, both fish settled down and fought hard down deep. There were a lot of tense moments during the fight, especially as the fish went down deep and the two lines crossed each other. Luckily my mate and I figured out which way the lines crossed and were able to uncross them without the risk of one fishing busting off the other one. After about 45 minutes we got the first fish to the boat. He obviously didn?t like the sight of the Double D and took off again. 10 minutes later we get him back and a shot with the Poon harpoon and a gaff, and we have a 67 inch (lower jaw fork length) fish in the boat. The fish is a solid 160 pounds and my young angler did a great job.

The bigger fish is still on, and Jeff (the original Sword Boy) is doing great. We have quite a bit of heat on this fish and although Jeff is looking worn out, he is keeping the pressure on. About an hour after the hookup, we get the fish up and she decides to jump again, only this time it was a few feet from the motors. I guess she came up to get a better look at us and decided she wanted to head back deep. She sounded to 300 feet, but now that Jeff got a closer look at her, he got invigorated and fought her even harder. Within 10 minutes we had the Poon harpoon in her and a gaff to bring her aboard. She measured out at 77 inches (LJFL). Her weight was just around 250 pounds.

As the boys were celebrating and taking pictures, my mate Vick and I were setting out the lines again. All the lines were out and we didn?t have to wait long. About 30 minutes later the deep tip rod gets hammered. We get on the rod and tart winding and we are TIGHT again. Within 5 seconds of us getting tight and line screaming off the reel, we can see the LP light screaming along the surface. This is another wild fish that did a few jumps and streaked across the surface for quite a while. A shorter 40 minute fight, and we now have our 3 rd fish in the boat. This fish was 60 inches and right at 100 pounds.

We end up the night we a 250 pounder, a 160 pounder and a 100 pounder. The ?Sword Boys? strike again and it was great to watch the future of our sport do it just as good as we can!