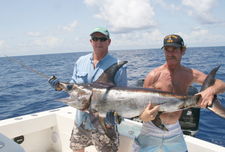 This past weekend was the 10th Annual Miami Swordfish Tournament. I have fished many of the Miami as well as the Islamorada Swordfish Tournaments in the past and have done very well in them. This year I had the pleasure of running a 39 SeaVee with IPS drives named the Showtime. What a gorgeous and very highly maneuverable boat. It is truly a fishing machine!

The night sword bite has been off the last few years and the daytime swordfishing has really taken over. Not many people even bother to go swordfishing at night anymore. Its a shame though, since at night, you really get to fight these fish in stand up gear and really earn your catch. Thats not to say that you cant do that in the day, because you certainly can and we have, but it does seem like the swordfish fight much harder at night. Also it seems that for the past few years the night bite has not been as productive, that is, until this tournament. There were quite a few fish caught this past weekend.

With a good crew on board, I decided to go south of Miami and fish the same area I fished two years ago and did pretty well. The weather was ideal with a light NE wind and the current was moving but not flying. We set out the baits, both dead and live, and after waiting a couple of hours we got a strong bite on the deep tip rod. We had this bait really deep due to the full moon. The angler got harnessed up and the battle began. After 30 minutes or so we could only get the fish up 200 or so feet to the 300 mark. Once at the 300 mark it would pull off a few hundred feet of line and the angler was doing all he could to get it back. I have seen a few swordfish in my career and have caught some pretty big ones. When this fish started heading inshore and digging down hard, I knew we had the real deal on. Unfortunately after about 45 minutes the hook pulled and although we may have been disappointed, everyone knew it was just the beginning of the night and we had plenty of time left. That night we had 4 bites and unfortunately we managed to miss them or got pulled off after a short fight. We even had one hooked up jumping in the moonlight. Unfortunately on the second jump it pulled off as well. As we were fighting that last fish which was about 1:30 in the morning we heard another boat call in a hookup on the radio. This boat was called the Stake Out and little did they know at the time, but they were in for an epic battle. With lines out at 2:00am everyone headed home except for the boat Stake Out which fought that fish for 5 more hours and at around 6:30 in the morning boated a beautiful 439 pound swordfish. Not only was this the biggest swordfish in the tournament, it turned out to be enough for them to secure first place. A big congrats to the crew of the Stake Out.

The second night, the weather was even nicer than the first night. It was basically flat calm. We started in the same area as the first night and about 9:00pm we got our first bite and after a bit of teasing we hooked up. Unfortunately it turned out to be a hammerhead shark. An hour later we hooked up again and this time we got the fish next to the boat, and got the leader for the release. The minimum size to kill a fish in this tournament is 100 pounds or 60 inches LJFL. This fish was right there so it was best to let it go which it did anyway, but only after we got the legal release on it a few times. We got another wicked bite an hour or so later with the fish screaming to the top with the LP light dancing on the surface. Unfortunately we missed that fish and by that time the tourney was over. Congrats to all the winners, especially the crew of the Stake Out with that very impressive swordfish.

Without a doubt, this past weekend was the best swordfishing I have seen at night for quite some time. We had 6 or 7 fish hooked up and we were not the only ones hooking fish. That being said though, it is fishing and it can change. Just earlier in the week we had a 12 hour sword trip. We dropped for day swords from noon to 8pm without a bite and we stayed just a few hours at night without a bite. Then just a few days later the bite picks way up. That being said, the fall is definitely the best time for swordfish in South Florida and if you ever wanted to catch one either day or night, now is the time. With the bite being as good as it is, dont get stuck on the couch, when you could be battling a true sea monster! Give me a call and lets set up that trip.