Swords During the Day in Miami 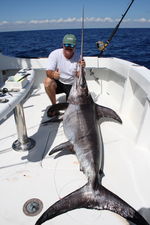 For the guys following my fishing reports, you know that I have been experimenting with catching swordfish during the day. I have caught a few and with help of many, especially my good friend Bobby Boyle, we have started to catch fish on a regular schedule. Even the days that Bob and I didnt catch fish, we still earned a lot each time we went out. Its definitely a learning process and I will hopefully continue to learn each time I go out.

This past weekend, I fished for swordfish on Friday during the day and also on Saturday during the day. On Friday I went out with my good friend Jimmy and we had great conditions with calm seas, but with a strong current. After I put the rig together and rigged the bait, I dropped it to the bottom with an LP electric reel. The bait hit the bottom and in less than a minute, we had a swordfish on. We brought the swordfish up without too much of a battle and when she broke the thermocline, the line scoped way out and she jumped. Although the swordfish didnt come completely out of the water, I saw her bill slashing the surface and saw the splash and could tell it was a decent fish. At this point she fought her way up to the surface and when we had her besides the boat we could tell she was in the 250 to 300 pound range. I had her on the leader for some time and I had a lot of pressure on her, but was still careful not to pull her off. She didnt want to budge into gaffing range and after some good boat driving by Jimmy and some hard leadering from me, Adam the mate stuck her with the Poon harpoon. She exploded at this time and dumper the leader, but now we had her on the rod as well as the dart rope. We got her back up and next to the boat and lifted her on board. The fish taped out at 81 inches but was thick throughout. I estimated her at 280  300 pounds. High fives were had by all, but then it was back to work.
Our second drop, we had another sword bite but missed it. The third drop we had a good bite on the bottom. We hooked up, but this was unlike any of the other swords I caught during the day. This fish was fighting hard all the way from the bottom to the top. I told Jimmy I think we have a thresher shark on, from the constant thumping of her tail. We jokingly called this fish Thumper. After 40 minutes or so, up she comes and it was a 400 pound big eye thresher shark. We obviously let her go and called it a day.

The next day, my charter was a good friend and client, Warren, who happens to keep his boat at my marina as well. This time the conditions werent as good. We had a North wind and the seas were starting to kick up. I had never really done well dropping for swords during the day when it was rough. On a good note, the North wind was slowing our drift down. We dropped once and we didnt get a bite. Our second drop, we got tight on a fish, but after 5 minutes, the fish got off. We pulled up our rig and saw the hook was cut off, so we obviously had a shark on. The third drop we hooked a fish and it started thumping just like the thresher we hooked the day before. I definitely thought we had another shark on. About 10 minutes into the battle, we started having electric reel issues. I ended up practically hand lining in the rest of the line. Eventually we got the reel working again, and after 45 minutes we saw that we had a swordfish on, but it was hooked in the tail. The hook in the tail was what was causing the thumping on the line, but it also caused the fish to drown. Either way, swordfish are great to eat and we had 4 guys on board that were licking the lips in anticipation of some good swordfish steaks. This fish weighed in at 220 pounds on the scale back at the marina.

Now that we have some fish under our belt, I am going to start offering daytime swordfish trips. I am going to do these trips in combination with our night sword trips. Basically we will fish from noon to midnight and target swordfish with two totally different techniques. How cool would that be to catch a swordfish during the day and then catch another swordfish at night. The techniques are so totally different that anyone who is a hardcore fisherman will love a trip like this. If you want more information on these trips or any trip for that matter, please call me, or shoot over an e-mail and lets get you hooked up!.