Day Swords and Fishing the Edge 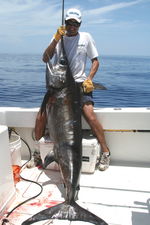 This is normally the time of year that we are looking for mahis in the Gulfstream. The dolphin fishing was good in the beginning of June but has really dropped off since then. The good news is that we have been concentrating on either daytime swordfish or fishing on the edge and both have been very good. I do expect the dolphin fishing to pick back up soon, just like it did last year.

The daytime sword bite has been good. We did have one trip where we didnt catch a sword, but all the other trips have produced at least one swordfish. These types of trips are more like marlin fishing where there is a lot of waiting, followed by a short period of pure madness. Although we have had day trips where we caught up to 7 swordfish in one day, most trips produce one to 3 fish per day and occasionally you will have a trip where the fish are not cooperating. The rewarding aspect to day time swordfish is that you really stand a chance of catching a truly big fish. Some of the day swords will push upwards of 500 pounds and 300 pounders, although not an everyday event, occur more frequently than you might think. Also the method of dropping a bait to the bottom in 1600 feet of water and getting a bite is pretty cool. Then you dont know exactly what you are dealing with. Is it a big fish, is it a swordfish, the mystery remains until you get the fish to the boat. For those that have done a lot of big game fishing, this is a trip that you want to experience. By the way, prime season for daytime swords is now until November.

The other trip that we have been doing is live bait fishing on the edge. This is typically not the prime season for fishing on the edge, but we have had some great trips these past few weeks. Not only can you catch a bunch of fish, but you can also catch quite a few different species as well. The possibilities are kingfish, bonitas, cobia, sailfish, barracuda, snappers, amberjacks, African pompano, etc. The main two will definitely be kingfish and bonitas. Kingfish are good table fare but bonitas are not. Although the bonitas are not good for the table, they fight extremely hard and are a very worthy adversary. Sailfish season is in the winter and spring, but we did have a trip this week were we caught 3 sailfish and I believe almost every one of our trips has produced at least one sailfish  not bad for July! We also had a week or so of catching an African Pompano on every trip. Although not rare, they are also not a very common catch either. They fight hard especially on lighter tackle. Fishing with live baits on the edge can produce a lot of fish and what a great way to spend some time with friends or family catching fish in beautiful South Florida.

Give me a call and let me know what sparks your interest, whether it is day or night swordfish, live bait fishing on the edge, fishing in the Bahamas, etc. Well set up that trip and have a blast!