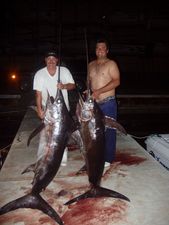 Just a few days ago, in my last report, I mentioned that we had some swordfish trips coming up. We had some trips and we have more sword trips booked in the next few days. On Monday night, we had a great trip that I wanted to get out to you guys while my memory was fresh.

We started out catching bait, which was really tough, but we still caught some. I already had some bait that I got from my bait pen and also had plenty of rigged squid. We had enough bait to fish with, and with flat seas and we got set up on our normal sword grounds and got all our baits out by the time it got dark. Just as it got dark, the long jug goes off. We got Tommy, our first angler up in the harness and ready for battle. The line is taking off nicely and both my mate and I figured it was a decent fish, but not a big fish. Tommy was a wrestler in High School and had plenty of shoulders to match up against his adversary. Close to an hour went by, but Tommy was gaining almost the entire time. We had a bit of heat on this fish and after exactly one hour, I had the leader in my hand. I was pulling gently on the leader and the fish felt the extra pressure on the line and surged straight up and jumped clear out of the water within 5 feet of the motors. While we had a shot, I?m yelling at my mate to stick him with the harpoon while he was in the air, but he was just out of reach. By the looks of it the sword didn?t like the boat, or us and dove straight down again. At this point, I felt like we already had our shot and maybe the fish was going to get lucky and turn himself loose. Everything held tight and Tommy got the fish back up to the surface. With all the excitement of him jumping the first time, I estimated the fish at 200 pounds. When I got the leader the second time, and got a better view, I clearly knew he was bigger. My mate Vick had the ?Poon? harpoon ready, we stuck some gaffs in him (I should say her) and yanked her on board. I guess she didn?t like the fiberglass on the Double D, because she went nuts. I really need to let everyone know that you must be extremely careful in landing a big fish, especially with ones that have a huge weapon in front of their nose. My mate stood on her bill, I sat on her tail, and one of my customers sat on her midsection. Even with 600 pounds of men on her, she went nuts and practically threw us off of her. At one point she jumped so high in the boat that I thought she was going back in the water. Luckily we subdued her and she settled down. As I mentioned before, you need to be very careful with big fish, and both my mate and I have handled quite our share, so we were prepared and ready not to get hurt. We got a tape on her and she was an amazing 85 inches from lower jay to the fork of the tail and 3 inches shy of a total length of 10 feet. She weighed out at 310 pounds.

With a trophy like that on the boat, I wasn?t really expecting much else. No more than a half hour goes by, when we get a bite on the tip rod. The bait got hit hard, but no immediate hook up. I reeled up the bait and a decent sword follows it up. The sword had whacked the bait off the hook, and all we had left was a few pieces of the head. We reeled up another rod with a bait on it and tossed a squid at her as well. She whacked one of the other baits and seemed to have disappeared. A minute or so later she eats the squid bait. I fed her for a few seconds, locked down on the drag and game on. By the first few looks at her while we had her up on the surface, I estimated 100 pounds ? Wrong again. One of the other anglers got harnessed in and after approximately a half hour we got the leader on her and stuck her with the ?Poon? harpoon. This one settled down immediately. She measured out at 75 inches from lower jaw to fork of the tail and weighed out at 238 pounds. We caught this fish fairly quick, but she had eaten the squid and we had her gagged pretty good.

That is quite the night, but we weren?t done yet. We still had some baits out when another rod goes off. Another angler gets to the rod and after a short fight we releases our 3rd fish, which was just legal, but obviously we had plenty of meat on board already so we let her go.

It was a quick run back to the marina, and everyone was quite excited.
All sword trips obviously don?t go like this, but as I always said, the possibility of a 300 hundred plus pound fish exists on any given night of the year. We went out the next night and the radio chatter was very bleak. We only heard of one or two fish caught, and luckily we were on one the ones that caught a fish that night. Every sword that is caught on our boat is important and we will work hard to get you guys on fish. Hopefully our luck will continue and we can have a few more nights like the last couple.

As I mentioned in my last report, we have a few more sword trips, then it is off to the Bahamas again. Most importantly, I have openings for two swordfish tournaments in August. If you want to try your luck in one of the tournaments or just want to go have a fun night of swordfishing, give me a call and lets set it up! The weather is calm in the summer, so lets go get them!