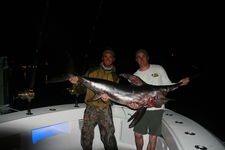 A couple of weeks ago, I reported how slow the swordfishing was. Well things certainly do change and the swordfishing the past few days has been on fire. The night time swordfishing has been as good as I have seen it for quite some time. I know the commercial boats all up and down the US coast have had a great summer and fall with lots of swordfish, so I am hoping what we have seen the past few nights is just the beginning of a great season. All the great fishing also coincided with the Miami Swordfish Tournament.

We fished the Miami Swordfish Tournament this past weekend and finished in third place. Anytime you are in the top three, you have done extremely well. The Miami Swordfish Tournament is usually a two night tournament, but the first night the wind was blowing hard. It was an East wing of 20 knots with gusts close to 30. It was a wise decision by the tournament staff to cancel the first night and make it a one night tournament. The seas laid down nicely by the second night and we had a mere 3 ft sea. I truly like the format of this tournament as it allows points for released fish as well as points for weighed fish. The minimum size to bring to the dock is a 60 inch LJFL (lower jaw to fork length) swordfish, which is usually about 100 pounds. Anything less than that is to be photographed (with the nights T-shirt in the picture) and released. Any small fish is now released and it gives the crews with skill the ability to catch a few fish and still have the chance of winning compared to just having to rely on getting lucky and hooking the one big fish. Dont get me wrong though, it takes tremendous skill to catch a big swordfish and everyone wishes they are the ones to catch the heaviest fish of the tourney.

I decided to fish a bit more south than I usually fish and to fish an area that I have done well before. Lines it were at 7:00am but in all reality it doesnt get dark until about 7:45. At 8:02 we got bit and we successfully leadered, photographed and released the first swordfish of the tournament. In the next hour and a half we had three more swordfish on, pulling drag, and with anglers fighting them stand up in the harness (IGFA rules  no fighting fish in the rod holders). Unfortunately all three fish pulled off. We actually had one with a few feet of the bow and almost got the release, which would have definitely helped out in the quest for the win. I re-drifted through my numbers but the bite slowed down. We caught a big hammerhead shark on that drift. With a few hours left to lines out, I made another move to a slightly different area that I had luck before and as we were putting our spread out, we hooked another swordfish. This time we successfully photographed, leadered and released our second fish of the night. As we were putting the spread back out, we got bit again, but this one pulled off after a few minutes. Setting out again, we successfully caught our third swordfish of the night. We ended up hooking 7 swordfish that night; we caught three and also released a big shark. It was a great night of fishing and it has been the most action I have seen for night swordfishing on rod and reel for quite some time. If we had managed to catch one of the ones that we pulled off, we would have won the whole tournament. Congratulations to the winners. The first place boat had 2 releases and boated a fish weighing 113 pounds giving them 313 points. Second place boat weighed in awesome fish at 312 pounds and we had 300 points for third place. We also won top release boat.

The day sword bite has also picked up. We caught a day sword on our sword trip we had last week. It seems that right now there are a lot of swordfish in our area. Besides swordfishing, there are a few sailfish around. It is a great sign that the sails are already making a showing as true sailfish season starts in a month or so. Besides sailfish, there have been a few nice dolphin on the edge as well as kingfish, a few wahoo, bonitas and some small tunas.