Its been a busy couple of weeks both with tournaments and with charters.
We fished our first tournament on the new 43 SeaVee Walkaround. What a BEAST! It is basically a sportfisherman with a tall tower combined with the versatility of a center console. When you hook a sailfish on a sportfisherman, you need to follow that fish with the transom and are basically not fishing the remainder of your baits. With this boat, you can chase the fish off the bow, and still fish your entire spread behind the boat. It is quite the fishing machine. Although we didnt win we did place in the top ten so it was still a productive tournament for us. The next tournament was in Palm Beach and due to some prior commitments for the 43 SeaVee, we fished the 39 SeaVee Showtime. That boat has IPS drives and is probably the most maneuverable boat on the market. The first day we struggled a bit and only caught 2 sails, but the second day we ended up catching 6 more and although it was not enough, we still had a great time.

In Miami, even though there hasnt been blue water and strong north current, there are definitely some sailfish around as well as some mahis, kings, small blackfin tunas and a few wahoo. We did catch a 35 pound wahoo off the kite last week. The conditions this week have changed though and there is blue water with strong north current and a front that just past so I expect the sailfishing to get extremely good this week.

We also did two swordfish trips, and our first trip we never got a bite and that makes for a tough day. Fortunately my client had also gone swordfishing with me about a month ago and on that trip we got two swords. Our second swordfish trip was yesterday with a few guys I fished with last year. Last year we caught a small swordfish one day and the next day we caught a big yellowfin tuna and some sailfish. On yesterdays trip we made the first drop and as we approached the back end of a hole, I was telling my mate, that we havent had a bite on the backside of this hole for quite a while. A minute goes by and the rod bends over hard. We get on the reel and start gaining some line. After over 45 minutes of gaining and losing line we got to the windon leader and pulled the lead off. The fish then skyrocketed out of the water. She jumped at least two to three full body lengths out of the water within 25 feet of the boat. What a sight!! The fish looked at least 250 pounds. At that point the sword ran back down 500 to 600 feet. We slowly inched her back up only for her to do that again a couple more times. Finally we got her close enough for a gaff and harpoon. With the fish on board you could tell she was over 250 pounds because she was fat from the tail all the way to the head. We continued fishing and had two more extremely solid bites with what seemed like big fish, but unfortunately both became unglued before we could get them to the top. Definitely a great day of swordfishing.

The holidays are rapidly approaching and I wish everyone a safe and happy holiday week. I still have dates open so if you have relatives and friends in town or are visiting friends or relatives, give me a call and lets set up that trip!! 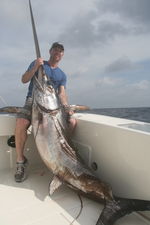