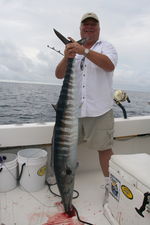 October is usually a month of transition. We say goodbye to the summer fishing for dorados and get ready for the winter run of sailfish. On the edge during October you can expect some fall kingfish, an occasional wahoo and the beginning of some sailfish. This October has been exactly that and we have had some decent trips and some slow trips. The good news is that in the last three or so full day trips we have averaged 1 to 3 sailfish per day. It has been a matter of finding the right water with blue water and north current being the right water. On some trips we have gone as far as Ocean Reef looking for that scenario. The last few trips we have found good conditions just south of Fowey Light. Hopefully the good water will continue to push north and we can expect good conditions right in front of Miami.

Offshore, the swordfish continue to bite well. Just after my last report we managed two daytime trips and caught fish on both trips. The first trip we caught one swordfish about 140 pounds and lost two others. The second trip we caught a 200 pounder and a 120 pound sword. About a week after that, the sword bite really turned on and I know of at least three boats that caught 5 or 6 six swordfish in one day. The majority of the fish were 100 to 200 pounds. We didnt have any night trips, but the night bite also produced the same size fish. I did hear that the sword bite has slowed down a bit in the last few days, but I can only imagine that with the rising moon, the fish will bite real well this week and next.

Just like I mentioned at the end of my last report, this is a good time for wahoos in the Bahamas. We did a trip to Bimini this week and went high speed trolling for wahoos. It was a great trip and we caught plenty of wahoo and also a few nice blackfin tunas. Not only was the action good, but the wahoo were all nice size fish. We did catch one that was about 25 pounds but the majority were from 40 to 60 pounds. Those are some nice wahoos!

The winter bookings are starting to increase and now is the time to book for the upcoming sailfish season. It is also the time to take advantage of the wahoos in Bimini and the good swordfish bite (day or night). November is also an excellent month to fish on the edge as the sailfish will have already shown up as well as kingfish and nice dorados on the edge.