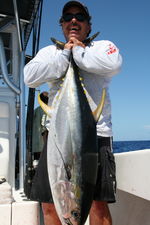 These past two weeks we have caught a lot of tunas. May is probably the best month for blackfin tunas in Miami, but June is good as well. Not only have we been catching a good amount of blackfins, but I also went over to the Bahamas last week and we did great with the yellowfin tunas. What a blast it has been catching all these tunas. Besides tunas there are still a lot of sailfish in Miami. We also caught and released a small white marlin and while in the Bahamas we also hooked (didnt catch though) a blue marlin. It has been fun to see a variety of billfish in just a few weeks.

In Miami, the sailfish are still coming through in great numbers, our best day in the past two weeks we caught 10 sails. We have had multiple days of 8 and 9 fish. The fish are not coming through in big packs so most of our bites have been singles, but catching 8 or 10 singles in a day keeps you busy. We did have a few multiples (double headers and a triple header) but most of the sailfish bites have been singles.
Besides sailfish, the blackfin tunas have arrived. We have caught at least two blackfins on every trip we have had and our best day was 6 blackfins in one afternoon. The best blackfin bite is the late afternoon and I do offer and have done more afternoon to evening trips in the past two week. The blackfins we are seeing are also very decent in size averaging between 25 and 35 pounds. Most of the blackfins we have caught have also been in multiples where we would hook 2 to 3 blackfins at one time.

I also mentioned that I was in the Bahamas for a few days and we did some bottom fishing for mutton snappers and also found some yellowfin tunas. The mutton bite was fairly good and the muttons were decent size. We didnt catch any monster muttons, but our biggest mutton was probably 14 pounds. One day we decided to hed towards Isaacs and look for the tunas. We found a few schools of birds but by mid afternoon had not found any tunas with them. Our fifth flock of birds was the right one and we had the yellowfins chummed right up to the boat. We had the tuna school within 10 feet of the boat. I dont think I will ever forget that sight of big tunas so close. Obviously being in the Bahamas, the water was super clear and it was quite the sight. Most of the fish were between 30 and 60 pounds, but we did catch a few that were between 75 and 90 pounds. We caught the tunas on 30 and 50 pound line and I myself had the pleasure of catching one of the bigger ones on the 30 pound line. What a great fish and what a great fight. As a charter boat captain I love to see my customers fight fish, but I do miss pulling on a big fish myself. This trip made up for it as both my customers and I all caught big fish on this trip.

We are heading into summer and that means dolphin fishing offshore, trips to the Bahamas and daytime swordfishing. There has been more daytime swords caught recently including a 500 pound plus fish caught by a friend of mine. Now is the time to book your trips so give me a shout and lets hook the big one!