What a blast it has been fishing these past few weeks. We are seeing the best fishing in Miami so far this year and it is about to get even better. The sailfishing has been very consistent with 3 to 6 fish a day almost every day. The afternoons seem to be better than the mornings and this will continue well into late May. The conditions have been good with blue water and north current and for the most part it has been practically flat calm. There have been some days that there has not been enough wind for the helium on the kite, but even those days have produced. One of our better days it was flat calm with zero wind. We had to slow troll live baits off the riggers but we had a great “no wind bite”. There were a lot of free jumpers (sailfish that are jumping on their own) and it was just a matter of getting in front of them. We saw three freejumpers jumping side by side and we got in front of them and put out baits out through the riggers. With 4 baits out we instantly hooked a quad (4 sailfish at one time) and had at least 4 more sailfish back there looking for something to eat. With only two anglers on board we had our hands full. After that quad we baited another freejumper and hooked a doubleheader. We also had a few sailfish form earlier in the day and some blackfin tunas. Not a bad half-day trip. 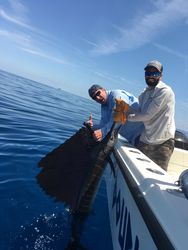 Speaking of blackfin tunas, they have finally arrived. Earlier in the month we were catching the 10 to 15 pounders but now we are getting the 25 to 30 pounders with reports of some 35 to 40 pound fish as well. These are one of my favorite fish to catch and if you really want to target blackfins then a late afternoon trip is where it’s at.

There have also been some kingfish around and that will get better as w get into May with the bigger smokers showing up. We have also had some mahis both on the edge and offshore in the Gulfstream. So as you can see it has been a very good month here in Miami.

May will bring the same kind of fishing and will probably be a bit better as well, with more blackfin tunas and kingfish than this month. Also in May we will be going more to the Bahamas and hopefully targeting the yellowfin tunas. We went last week but the wind was so horrendous we couldn't get out to the tuna grounds. The wind usually starts to subside in May so we should be able to go target yellowfin soon, which by the way, a few yellowfins were sighted off of Miami just this week.

As many of you know, in June I will be in San Salvador Bahamas with my boat targeting blue marlin. I still have a few dates open for that trip so if you are interested give me a call. Also now is the time to set up your trips for summertime mahi fishing in the Gulfstream. It's a great way to spend the day with family and friends and at the same time bring back a bunch of fish to eat!