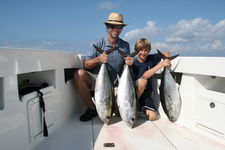 The tunas are definitely here. Blackfin tunas in Miami and yellowfin tunas in the Bahamas. Starting with Miami, the big blackfins have shown up and in big numbers. For the past week or so we have been averaging 3 to 6 tunas per trip. The fish are decent in size as well averaging 25 to 35 pounds. We have been catching most of the balckfin tunas on the kite baits but caught some on the flatlines as well. Bait was tough for a while, but is now getting a bit better which is good, since live chumming will definitely increases your chances of catching these tunas. Throwing out live baits as chum will get the blackfins busting and there really is no sight like seeing big blackfins coming out of the water and eating the live baits you just threw out. Mix those freebies in with a few hooked baits and it is game on! This week has also been flat calm which makes the show even more fun to watch. In the next week or two, Ill hopefully get a video of this great tuna action. On the other side of the Stream, in the Bahamas, the reports are coming in on some great yellowfin tuna action. Although I havent made the trip yet, many people I know have been coming back with a dozen or more yellowfins per trip. The yellowfins are bigger than their cousins the blackfins and range from 50 to 120 pounds. Live chumming and chunking has worked best.

Besides the tunas, the edge is also still holding plenty of sailfish. Although we are not seeing double digit days, we have been catching between 2 to 5 sailfish on almost every trip. The sails and the tunas have been making up the majority of the action along with some bonitas. The kingfish though have not been as abundant as they should be this time of year. Some kings are being caught and the ones that are being caught are good size fish from 20 to 40 pounds, but we are still missing the numbers of kings we usually see in the spring.

Farther offshore there have been a few dolphin, but the big push hasnt come yet. They are on their way and should show up very soon. Yesterday we did a combo sword/sailfish trip and started the day with the swordfish portion. We hooked a swordfish on the first drop but the fish came off about halfway up. The second drop we hooked a very impressive fish. Once we got tight, the swordfish fought very hard on the bottom and we had a hard time inching here off the bottom. Once we worked her off the bottom, she start flying to the surface and every couple of hundred feet she would stop, dig back down and then reverse directions and come up fast again. With almost 700 feet of line still out, this magnificent beast jumped. Nobody could believe the size of the fish and one of the customers actually though that a whale had breached. We got her closer and got her all the way to the windon leader when she really aired it out and jumped 100 feet from the boat. It was just two months ago that we caught a sword that was between 550 and 600 pounds and this fish easily had a 100 more pounds on her. Unfortunately after her tremendous jumps and thrashing on the surface like a blue marlin, she came off with about half of the wind on in the reel. I say unfortunately because we did not get a measurement on her to get her true size, but we were very fortunate to see a swordfish that big, in the day, jumping in a flat calm sea. It was a sight that nobody on board will ever forget. The size of her bill, the girth of her body and the enormous size of her tail, I would estimate the fish at 650 pounds plus. What a sight! The second part of the trip went equally as well as we released two sailfish and caught 5 blackfin tunas.
Spring is here and now is the time to take advantage of the great tuna bite that is going on both here and in the Bahamas. If you got tuna fever, give me a call and lets get it done. Also from now throughout the summer is time to enjoy great weather and great daytime swordfish action. If you prefer, we can also target the broadbills in the evening as well. For those that want to get away for a few days, the Bahamas trips are just the ticket. Enjoy a bit if time in the islands and enjoy some great fishing as well. Whatever type of fishing you like, give me a call and lets set it up!