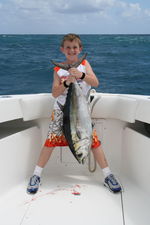 Spring continues to produce quality catches and a variety of species. It sounds like a broken record, but spring is my favorite time to fish in South Florida. Since my last report, we have caught a few more blackfin tunas and most where in the 25 to 30 pound class. I have attached a picture of a young angler who caught his first tuna ever and what a big smile on his face when the tuna was next to the boat. He basically fought the tuna on his own in moderate seas and also succeeded in catching a few sailfish as well. Besides the tunas, the sailfish are definitely still on the prowl. We have had success with the sails on every trip and most often are catching 2  5 sailfish per outing. I fished with a customer of mine from Buffalo that caught his first sailfish a few years back. He came back to Miami on vacation to enjoy our good weather and to see if his luck with sailfish continues. We did catch a few sailfish that day but one of the sailfish was enormous and definitely fought like a big fish. We had caught a sailfish earlier in the day and then we went a while without a bite. I picked up and moved to a different area and set back up. After only a short while, I see a dark shape under the long kite bait. I had the kite way out and barely could see the fish. I thought to myself that this was too big for a sailfish, but the color and shape sure did look like one. My customer got to the rod and we hooked this fish that went airborne ands showed us that it was indeed a sailfish. We hooked the sailfish in 150 feet of water and it dragged us out to over 300 feet. After almost an hour, we got the sailfish next to the boat and measured it. It was over 8 feet in length and was stocky to say the least; we revived the sailfish and watched her swim away to fight again.

Besides a few tunas and the sailfish, there have also been some kingfish around as well as plenty of dolphin. A few days last week the dolphin were everywhere, especially in the morning. What I havent done a lot of this spring has been wreck fishing. I know the amberjacks are there, but I need to spend some time and fish for the African pompanos as well.

I havent swordfished at all since my last report and am hoping that the swordfish bite has picked up. I havent heard any really good reports, but I will be out there at night few times in the next two weeks, so hopefully Ill have some good pictures and stories.

I did have a trip to Bimini this past weekend, but the weather was bit too rough to cross, so we had to postpone the trip. As we get past March and early April, the weather usually settles down and more trips are already in the books. Too bad we didnt go this past weekend as I was really looking forward to that trip.

I havent finalized my plans yet for this summer, but I usually go to Andros for the better part of June to fish for the yellowfin tunas. If you are interested in this type of a trip, please let me know as I would like to head over there again this summer.