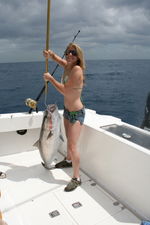 Since my last report, we have had 10 great days of fishing. I ended up fishing 10 out of the past 11 days and each day the fishing was excellent. I had a 3 day trip with Darren and his family. Darren had 5 people in his group and Darren is in a wheelchair. That being said though, Darren is an avid fisherman and loves to fish and be on the water, plus he is a great guy to hang around with. Last year I fished with Darren on his custom 34 SeaVee. This year his SeaVee is up north so we did these 3 trips on my good friends Capt. Jimmy Davids charterboat the L&H. What a blast we had as Jimmy and I took turns on the bridge, the cockpit and the tower. The first day the seas were calm so we ran offshore to look for dolphin. We ended up catching 32 dolphin and 6 wahoo. We then headed in and put the kites out on the edge and caught a few sailfish. The next morning we caught four sailfish with a different group. The afternoon we picked up Darren and his group again, and we found a big turtle offshore and caught 6 big cobias that were hanging out with the turtle. We then went back in on the edge and caught 3 sailfish and a few kings. The next day the seas were flat calm with barely enough wind for the kite. I was on the bridge when I saw a freejumper; we moved the boat in position and ended up hooking and catching a tripleheader of sailfish. The wind then died completely and we fished a few wrecks and caught some small snappers and a big amberjack. Then it was Jimmys turn on the bridge and he saw another freejumper and we caught two more sailfish from that pod of fish. It was a great three days of fishing with great clients and my good friend Jimmy David.

The next week I fished on my boat and we had some great groups and some awesome trips. This time of year is all about variety. Some groups want to target sailfish, other groups want dolphin and other groups simply want to catch fish and bend the rods. One trip comes to mind as we tried a lot of different things in one day and all of them produced. We started the day with the kites and quickly caught a beautiful sailfish. The kites came in and I dropped on a wreck and we caught some big amberjacks. It was back to the kites for the afternoon and we caught a doubleheader of tunas and quite a few kingfish. As I was packing up the gear to go home, I still had one kite out and we had just missed a sailfish, when a see a 20 pound dolphin flying through the spread. We ended up catching that dolphin on the short kite bait and to beat it all the mahi was hooked in the tail.

I had two swordfish trips this past week, one trip was cancelled and another was changed to a late afternoon trip on the edge. That afternoon trip we caught quite a few kingfish, a few amberjacks and we pulled off a blackfin tuna next to the boat. Most of the reports for swordfish from this past winter have been slow, but I am finally starting to hear of swordfish being caught both at night and during the day. That is good news as I have a swordfish trip tomorrow night as well as a few more trips in the next week or so.

The weekends in May are pretty much booked up. I do have one weekend trip open, but I also have quite a few weekday trips open. This is the time of year that you dont have to take a day off from work to go fishing. We can leave as late as 4:00 pm and fish until dark and still get in 4 to 5 hours of fishing. Also May can be one of the best months for mahi-mahi offshore, blackfin tunas and kingfish on the edge, and we are still getting multiple shots at sailfish practically every day. Dont hesitate; book your trips now while the fishing is red hot!