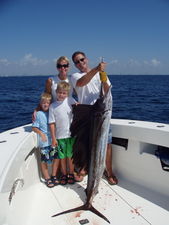 Since my last report, I was on vacation for a week, back to the Bahamas a few times, and fished Miami for a few days. Also since my last report, it seems we have been inundated with lots of rain. Along with the rain come thunderstorms and lightning which unfortunately has cancelled a lot of our swordfish trips. The good news is that this pattern should be lessening since thunderstorms are more frequent in June and July than in the next few months. That is good since we have quite a few sword trips to make up and we are now booked for both the Miami and Islamorada swordfish tournaments as well as the Dark Side Tournament in November. This still leaves one or two open sword tournaments this summer, so anyone interested should contact me as soon as possible. The news from the swordfish grounds is that it has been a slow summer so far, but I have heard of a few very nice fish ( 298 lbs and a fish over 400 pounds) caught in the last week or so. I believe this coming moon phase will bring an increase in the sword action and it should continuously get better.

The fishing in the Bahamas was good. Our last trip we decided to troll for a blue marlin in front of Bimini. It is a bit late in the year for blues in Bimini, but within our second hour we had a small blue marlin up. He ate one of our short lures and jumped around a bit until he pulled off. Although we didnt catch him, we had fun watching the bite. We then decided to do a bit of yellowtailing and bottom fishing. The yellowtails were thick, but there were a lot of small ones which we threw back. We did catch some flags as well though.

The last day I fished Miami was yesterday and I fished a family of 4 for half a day. It was a husband and wife and their 2 small sons (ages 8 and 7). Well, we had a blast. We caught plenty of bait and then went to the edge. Within our first 30 minutes we hooked and caught our first sailfish. Then it was bonitas, kingfish, cudas and another sailfish. The second sailfish was caught by the 8 year old with just a little help from Dad. We ended our trip with a barrage of bonitas. I can tell the young boys were wiped out as they slept the whole way back to the marina. As a guide, it was great to watch an entire family enjoying a good day on the water.

We are entering the slower part of our season, but the fishing can still be very good though, so give me a call and lets set up a trip!