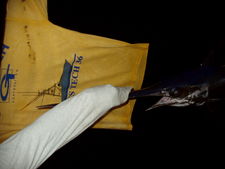 This past weekend was the Islamorada Swordfish Tournament. This swordfish tournament is not like most of the swordfish tournaments where biggest fish wins, but is more like a BBC where releases count as well as weighed fish. In a way, this takes a little of the luck out. The minimum size for a killed fish is 60 (lower jaw to fork length) which is around 100 pounds. This rule eliminates the killing of a lot of the really small swords. Any team that kills a swordfish that is less than 60 inches gets a 300 point deduction. All releases have to be verified with a camera and that nights shirt must be in the picture. All winners are also polygraphed and the rules are strictly enforced.

Last year we ended up in 3rd place and we fish south of Islamorada. The best thing we did this year was to pre-fish the night before the tourney. We fished the same area we fished last year, but only had 1 shark in a few hours. We spoke to other boats that also had similar results. We decided that for the tournament, we would fish north of Islamorada instead. It proved out to be a very good decision for us.

The first night started out slow but got a lot better. Lines in where at 8:00pm and within a few minutes of lines in, there were boats hooked up. Most though were fishing south and were hooked up with sharks. As the night progressed, a few swordfish were being caught. A little after 11:00am, we caught our first swordfish. If my memory is correct, it measured 58 inches (measured in the water as the rules stated). It is not easy measuring a wild swordfish in the water and I would have bet it was 100 pounds, but we took our pictures and released it. A short while later we caught a smaller sword and released that as well. We now had 2 fish and where somewhere in the hunt. A few hours later we hooked one and then had another on for a double. Both fish were somewhere between 50 and 60 inches, and we released both of them. About 30 minutes before lines out, we hooked a real decent fish that jumped quiet a few times. We fought it for about 15 minutes and as we were getting it within 100 feet of the leader, the hook pulled. No big deal though, because we were sitting in first place and won the daily.

The next night, word got out where the fish were, so we were determined to make all our shots count and hopefully catch a fish early. At 9:00pm we caught our first fish (~80 pounds) and released that one. As the night progressed we released 2 more and missed one which now placed us with 7 fish worth 700 points. That was enough to earn us 1st Place in the tournament.

There were some real nice fish caught as well. There was a whooper 324 pounder that won the big fish calcutta and a 185 and a 145 pounder. Congrats to those crews as well as to all who participated in this tournament. This tournament is no doubt first class. The accommodations at the Cheeca Lodge were awesome as was the awards banquet and really everything associated with this tourney. I know my mates and I, as well as my charter, worked hard every night including the nights preparing for this. Swordfishing is a team sport and I really cant say enough of my team. I have the best mates around, who certainly worked hard and my clients were awesome.
Entering any tournament can be stressful, especially for a charter captain who is hoping to make some money for his crew. I entered this tourney hoping to catch some fish, stay in the hunt and call on Lady Luck to help us out. Well my crew and Lady Luck did that and winning this swordfish tournament is definitely one of my highlights for this year.