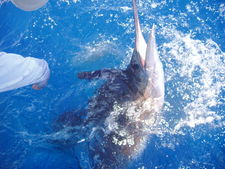 So much has happened since the last report. We have had some great trips and had a lot of fun in two tournaments. We fished the Fisher Island Sailfish Tournament a few weekends ago. It was a one day tournament and I am glad to say we won 1st place with 18 sailfish releases. We actually hooked over 30 sailfish that day and successfully released 18 of them. It was tremendous action with not only sailfish, but lots of dolphin. The next closest boat had 16 releases and after that the third place boat had 10. Towards the end of the day we were battling it out with the 2nd Place boat called the Owls Nest with my good friend Matty Tambor at the helm. Every time they would catch a sailfish we would answer back with a release of our own. Then we hooked a triple header and landed all three which solidified our lead. For extra measure we caught 2 more sails at the very end of the day. It was a lot of fun and good for the morale. Our next sailfish tournament was the Miami Billfish Tournament which is the largest sailfish tournament in Miami. We started off great with 6 sailfish release on the first day which placed us in 5th place. We held a top ten position for over half the tournament, but then we fell a little behind. We still managed to catch sailfish as well as dolphin, big kingfish and our first blackfin tuna of the season.

The sailfish tournaments are now over for the year, but we are now in what I consider the best season for fishing in South Florida. Not only are we still catching sailfish, (we caught 5 out of 7 yesterday), but we are now also catching dolphin, kingfish and blackfin tunas. Starting with dolphin, we are seeing some bigger dolphin on the edge as well as in the Gulfstream. Our biggest dolphin which was caught by Shawn from TR-1 autopilots weighed in at 41 pounds. It was a big bull dolphin which ate a live bait from the kite. The dolphin fishing will only get better as we get into late April and May. There have also been quite a few big kingfish around. Our biggest was 38 pounds, but there have been kingfish up to 56 pounds caught in the past few weeks. When the action is slow for sailfish, you can usually count on the kingfish to keep the reels singing. As I mentioned earlier, we caught our first blackfin of the season this past Sunday. Since then, we have caught a blackfin on every single trip but one. Hopefully this is an indication of a good year for the tunas.

I also did some night fishing. One night we went swordfishing and caught one small swordfish that we released, but had a lot of bites. We also caught a large squid that really made a mess of the boat. It will be fried squid rings for quite a while! The weather turned a bit sour on us, so we decided to head home early, but it was a lot of fun to get back out there. I have quite a few swordfish trips booked towards the end of the month and look forward to them. We also went tarpon fishing one night. Overall, it has been a pretty poor tarpon season, but the tarpon are finally starting to bite. We caught one out of two tarpons that night. Even the tarpon that we lost, we had on for a little while, so we got to enjoy the fight and watch the tarpon jump all over the place.

Now is probably the time to start thinking about the Bahamas as the weather starts to calm down. I am probably going to head back to Andros this June and look forward to catching some big yellowfin tunas as well as big dolphin and hopefully a marlin or two.

April is almost fully booked, but I do have some days open and I have plenty of days open in May which is a great month to fish in South Florida. I look forward to hearing from you so lets set up that trip and take advantage of some great fishing!