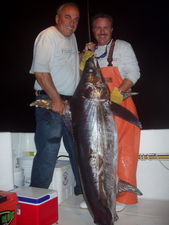 The last two weeks the fishing during the day has been very good. We have been fishing for swordfish at night for the majority of our trips and have had a few day trips as well. The day trips have been tailored to the late afternoon bite with most of our trips starting at noon and ending at dark. This allows us to get plenty of bait to chum with as well as capitalize on the late bite. We have had some red hot afternoons catching sailfish, blackfin tunas, kingfish and dolphin. Our best day for sailfish was catching 8 out 9 sails followed by 3 out 5 sailfish. The one afternoon we caught the three sailfish, we could have caught more as we had 4 sailfish pop up next to the boat, but we were too busy hooking and catching a double header of blackfin tunas. The tunas have been pretty consistent this spring and more boats are catching them not only in the late afternoon, but during the whole day. With that said though, the late afternoon is still the best time to catch them. There have been some dolphin offshore in the Gulfstream. We havent had any dolphin trips where we have been running offshore, but as we get into the summer, that will soon change.

As I mentioned earlier, we have had quite a few swordfish trips since my last report (8 trips). We have had some very tough swordfish conditions with a strong west wind almost every night, but we have been extremely lucky catching or releasing a swordfish on every single trip but one. The west wind (mostly 15-20 mph) is not typically a good wind for swordfish as it blows you through the productive areas very quickly, but like I said, we have been fortunate to have had some decent action on all our trips. We havent caught any monsters like the one we caught in our last report, but our biggest one was 180  200 pounds with a fork length of 71 inches, which is definitely a nice fish. We have had a few swords come completely our of the water and jump, including one that ate a bait as I was letting it out and jumped just feet from the side of the boat. It is impressive to see a fish of decent size in the air and then move so quickly in the water, especially at night.

The next two weeks we have a mixture of both day and night trips. I am hoping to continue posting good reports as the fishing should stay good for quite some more time.