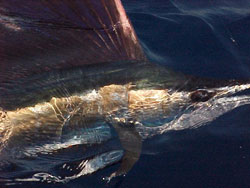 Without doubt the Sailfish is the most sought out species in South Florida, and for good reason. Not only are sailfish plentiful here, but they are acrobatic, beautiful and a great adversary on lighter tackle. Although sailfish can be caught year round, our typical sailfish season starts in November and ends in May.

As winter approaches (we do actually have a winter in South Florida, it is just a bit more warmer than some other places farther to the north) sailfish will migrate south following schools of bait. The sailfish bite after a cold front in January through April can be phenomenal. This is usually considered the best time of year for sailfish fishing. Double digit strikes and often double digit releases of sailfish in one day are not uncommon if the conditions are right. This is why Miami and the whole of Florida are considered one of the world's top destinations for catching sailfish. 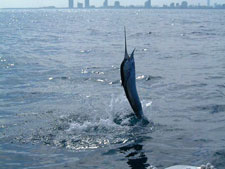 The preferred method for sailfishing in Miami is dangling live baits from fishing kites. This is an extremely exciting way to fish as you will often see the fish and the strike as it happens.

You keep your baits in the top of the water column to attract the surface feeding sailfish. You then see a fin or a bill pop up and circle your bait. Your blood is flowing as you feed the bait to the sail. The sailfish eats the bait and runs, you lock down on the drag, reel tight, the line pops off the kite clip and GAME ON!

Now imagine that, but instead of one sailfish in the spread we have a quad — 4 fish on at the same time. Talk about chaos — 4 wild sailfish jumping in all different directions. Sailfish can also be targeted without kites. The use of live baits either drifted or slow trolled can provide plenty of sailfish as well. 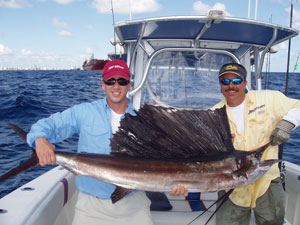 Most people who charter us, either from out of town or local anglers, will target sailfish. The chances of catching a sailfish on a trip during "Sailfish Season" are very good. This can be the first billfish for many anglers and most anglers will choose to keep the sailfish and have it mounted. The beauty of that is that you no longer have to kill a sailfish to have a mount made. As a matter of fact, killing sailfish aboard my vessel is not encouraged and not allowed. A measurement of the total length is the only thing needed. Sailfish are definitely a catch and release species.

All this action is merely a few miles from shore. You will never lose sight of land and the memory of a sailfish jumping with the Miami skyline in the background will last a lifetime!

Book Early - Places Can Be Limited

As mentioned earlier, sailfish season coincides with our winter season, which is also our busiest season. If you do want to target sailfish and book a trip with us, it is usually best to call us on (954) 805-8231 well in advance so we can get you the exact date that you want.