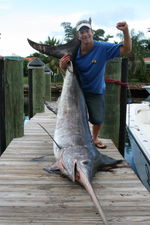 Back in January of last year, I got an e-mail from a guy in Cincinnati that was planning a fishing trip for him and his buddies for next year. Their goal was to catch a swordfish. Every year they plan a trip and target a different species. After a few e-mails, he booked 4 days in September to try to catch at least one swordfish. Through the year we kept in touch and as time was getting closer, we decided to try for at least a few daytime trips for swords and a maybe one night time trips as well.

The guys arrived from Cincinnati and we met on the boat at 7:00am. All 4 guys were super cool and loved to fish. They had gone out the night before on another boat and tried to catch a swordfish at night. Unfortunately they never got a bite so the pressure was on us to catch them one during the day. As we got out to the sword grounds we made a few drops. We had three bites but couldnt stay on for long. It was getting late but I wanted them to get a fish that day so we stayed out for one more drop. After the previous night and the results so far today, they probably thought that all the talk of swordfish in South Florida was a big lie. On our last drop, we got a wicked bite and it was game on! We hooked a decent fish and I sort of knew that this fish was at least 300 pounds. As the fish got to the surface, about 100 yards from the boat, she swung her huge bill in the air and came halfway out of the water. I leadered her and could see that she was hooked pretty good. She decided to run, but I held on to the leader and luckily turned her as may mate stuck the dart in her. We got her on board and she was a very fat 92 inch (LJFL). I guess her weight was very close to 400 pounds. The guys were ecstatic as they had now landed their first swordfish ever.

The next morning I took the fish to Baitmasters http://www.baitmasters.com)." target="_blank">www.baitmasters.com). They will steak the fish; vacuum seal the steaks and then flash freeze them. From there they are shipping the fish directly to the guys homes in Cincinnati. Mark at Baitmasters does a great job and this is a great service for my clients to get fish back home regardless of where they live. I was back to the boat and by 8:00am Ohio boys are there and we headed back out for another day of swordfishing. The weather was perfect and we got out their quick. Within 5 minutes of our first drop, we hooked another sword. This time it was the next anglers turn. He quickly caught his first swordfish and we decided to release it. Now two of the 4 guys had caught their first swordfish each. Our next drop we caught another sword so angler #3 had a sword to his credit as well. We released that fish as well. A few more drops were made and we had a few more bites. At 1:00pm we made another drop and we caught our third sword for the day and now everyone on board had caught a swordfish. On the way in I was talking with Dom whom had set up this trip and he wanted to thank us for a great trip. He was hoping to catch at least one swordfish in 4 days and was ecstatic that everyone caught a swordfish already and it was only day #2.

Day #3 as it turns out will be a day to be remembered for a very long time. To make a long story short we caught 7 swordfish that day. We released 6 of them and kept one more for the guys to take home. Some of the fish we released were 250 pounds or better. It is something else to see a fish that big swim back to the bottom. That fish we kept was also taken to Baitmasters and was properly steak, frozen and shipped to Ohio. Even better, every fish so for was caught with the new Daiwa MP 3000 reel and almost every swordfish was manually cranked from the bottom. Dom caught at least 2 swords manually cranking from the bottom and everyone else fought their swords at least partially by manually cranking on them. Dont get me wrong, it is still a great achievement to catch a swordfish during the day regardless of the reel you use, but to do it manually is simply outstanding. It is also a lot easier than most people think. The hardest part is bring the rig and weight back up when you dont get a bite, but that is the beauty of the Daiwa MP 3000 reel. If you dont get a bite, you can use the electric portion to bring up the weight and rig. If you do hook a fish, you can fight him manually just like any other reel. For whatever reason, a lot of our swordfish that day decided to be acrobatic. We got a lot of jumps out of the fish and we captured a lot of that in pictures and on video. Dom is going to put it all together and send it to me. I hope to be able to put in on my website soon.

Our 4th day we started a little bit later. On the way out we found two separate schools of mahis and by noon time we had our full limit of dolphin. The wind had come up a bit that day. We made two drops for swords that day had one bite that we missed and decided to hed back in. Our total was 11 swordfish caught in the first three days and a limit of dolphin on the 4th day. It was without a doubt a spectacular 4 days of fishing with the same group of guys. I know I had a great time with them and hope to see them soon. We had lots of laughs and shared some of the best daytime swordfishing I have ever seen. I still cant believe we caught 7 swordfish in one day. That is simply amazing.

Last year the day bite for swords stared heating up in September and lasted at least until January. My best months last year were Sept  Nov. As you can see the bite is on so give me a call and lets go catch a sword during the day.