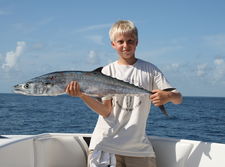 In the past week or so we had three days trips and 2 evening swordfish trips. Considering it is August, that is pretty good. The fishing during the day has actually been very good. We ventured offshore one day for dolphin and hit the mother lode. We had 4 guys on board and caught our limit of mahis, and all the mahi were of decent size. The fish averaged from 6 to 15 pounds with the majority of the dolphin at 10 or more pounds. We found the fish under a huge mat of grass offshore and had a blast catching them. As anyone who has dolphin fished before can tell you, these fish make a mess on the boat and I was cleaning and scrubbing for quite some time, but this is the type of cleaning I dont mind, since I know my clients had a great time catching fish.

Farther inshore on the edge, there have been quite a few kingfish around as well as quite a few bonitas. The kings havent been of any tremendous size, but most kings have been between 5 and 15 pounds. There are times, especially morning that the kings have been biting extremely well. As you venture into the middle of the day, the king bite seems to slow down. Yesterday we fish the edge as well. There was a strong breeze from the east. The sea conditions were fine though. There was blue water and a slight north current. With the breeze blowing and fishing two kites off the stern with the big sea anchor up front, my clients and I joked at how it looked like we were fishing in the winter time, except from the air temperature being a little bit hotter than winter time. Judging from some of our catch it almost looked like winter as well as we caught two sailfish and some dolphin. We also caught some bonitas and quite a few barracudas. Overall though it was a great day on the water and catching two sailfish for anglers who never really ocean fished before was a blast.

The night time swordfishing has been a little bit slow. Our first sword trip this week we had a few bites and caught one swordfish that was just less than 100 pounds. Our second trip we didnt have any bites at all. This can really be a bummer and gets me down, but we worked the baits hard all night. We had good bait, with good conditions. Unfortunately the bite wasnt happening as there wasnt any fish reported on the radio either. The next day there was a swordfish tournament and with 56 boats fishing from 7:00pm to almost morning, only 4 swordfish were caught. Not to worry though, according to my logbooks, the end of August can be good and September and October have always been great months. I Hope my logbooks are right as I am set to leave for Islamorada and fish the Islamorada Swordfish tournament this weekend. We have always done well there in the past (won it last year) and hopefully well have some good luck this year.