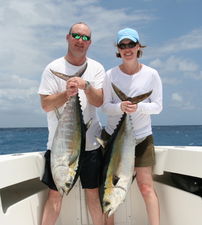 Last week the fishing was on fire. This week is still remains good, but not like what we saw last week. Sailfish season is traditionally November through May. The best time is usually in the winter with January and February being the peak months. For the past few years, April has also been a good month and this year April was on fire. The sailfish are making there way out of town, but they were here in full force last week as they were apparently getting ready to move on through. It was not uncommon to get double digit sailfish releases last week and every day that we went sailfishing we had a double digit day with most days averaging 12  14 fish per day. Our best day was 20 sailfish releases and we could have had more, but we ran out of bait and had some tired anglers on board. As usual with spring time, the best bite has been in the afternoon. We had great looking water with plenty of current and plenty of wind, which kept the sailfish biting for well over a week. The wind has died down some this week and we are now seeing more traditional days of a few sailfish per day (our best this week was 7 sailfish releases).

Besides sailfish, we had a few weeks of some very good action on big kingfish. That slowed down a bit, but we did catch some nice kings between 15 and 35 pound this week. There have also been some blackfin tunas showing up and the tunas we caught have been on the large side averaging from 30 to 36 pounds. Besides the tunas and kingfish, there have also been dorado and bonitas on the edge.

This the time of year that the late afternoon bite is usually the best. I offer a lot of trips where we start at noon (or later) and fish until dark. You seem to have a better chance at sailfish, big kingfish and definitely more blackfin tunas. We are also getting into the time of year where the dorado will move into the Gulfstream and soon we will be hunting for schools of them in the Stream. This will also coincide with doing a few daytime drops for swordfish. Some guys have been doing a few day drops and have caught some nice swordfish in the past few weeks. Now is also the time to start thinking about trips to the islands. The Bahamas will offer a lot of opportunities for the next few months including, yellowfin tunas, snappers and groupers as well as marlin and dorados.

As you can see the opportunities exist, its just a matter of picking the species you want to target. Give me a call and lets set up that trip now!