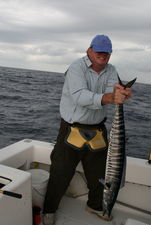 Sorry for the delay between reports, but I was over in the Bahamas for most of the time. I spent a good deal of time in Andros and some time in Bimini as well. June is when I hed over to Andros and fish for the yellowfin tunas. Besides the tunas, you can also catch dolphin, wahoo and possibly a blue marlin. You can also bottom fish for yellowtail snappers and mutton snappers.

This year there were plenty of tunas, but most were on the small size (15  30 pounds). We did manage to catch a few tunas in the 60 to 75 pound class. When the small tunas were biting we scaled down our tackle and had a blast catching them. Luckily we caught the bigger tunas on the larger gear, but we did have one big tuna on a lighter spinner rod which we never did end up catching. There were plenty of dolphin still around. Usually by the beginning to middle of June the dolphin are pretty much gone, but that was not the case this year. All the dolphin were gaffer size and most were between 20 and 35 pounds. Big dolphin are always a lot of fun. We also had a decent time catching a few wahoo between 20 and 45 pounds. It was definitely a smorgasbord of offshore fishing.

The highlight though was the big blue marlin that we baited. While we were chunking and live baiting for the tunas, I looked down towards the stern of the boat and saw a big blue marlin just lying by the motors. The blue was somewhere between 375 and 450 pounds. Both her pectoral fins and her tail fin were light up in a vivid iridescent blue color. I looked further down and saw a few small tunas fleeing for their lives. Since we werent trolling at the time, we did have any of the big 80 wides out. I knew that the marlin would not stay next to the boat for that long, so I grabbed one of the tuna rods (30 pound with 80 pound leader). I cut the hook off and tied on a bigger hook. I then got one of the guys to get me one of the tunas that we had caught from the fish box. I pinned the tuna to the hook and started to skip her off the transom. The blue spotted the tuna right away and every time she charged I sped the boat up and made it seem like the tuna was trying to get away. The blue fired up on her three times and missed. On the fourth time I watched her open her mouth and engulf the 20 pound tuna in one bite. I fed her the bait for a good long time and then stuck the reel into strike. The angler grabbed the rod and fought the fish stand up. After a few minutes we got him into a harness and it was game on. We fought the blue for a while and got her almost within leader distance. The angler did a great job on the fish especially when he got himself into a rhythm. I knew it was only a matter of time until the leader wore through. The whole thing was so very cool. First we saw a big blue marlin just swimming next to the boat all lit up. Secondly I fed her a 20 pound tuna which she ate within 30 feet of the boat. Thirdly we fought her stand up and with a 30 wide. It was a sight I will never ever forget and it is something we all want to be able to see at least once (hopefully more than that) in our lives.

Now I am back in Miami and am looking forward to targeting some big daytime swords as well as hunting for dolphin in the Gulfstream. Give me a call and let set up a trip; you never know when a big blue marlin will come into your spread or when a big 500 pound swordie eats your bait!