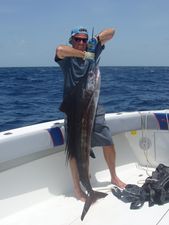 Another two weeks has gone by since the last report, and we have more Bimini adventures, swordfish adventures and local fishing to report on.

I was in Bimini again quite a few times these past two weeks and the fishing there remains very good. We caught mutton snappers on every trip. We haven?t had the quantity we were catching them during the full moon periods in May and June, but the average size has gone up. Our largest mutton these past two weeks was 21 pounds. The yellowtail fishing has been absolutely outstanding. Not only are there a lot of yellowtails the size of the fish is truly impressive. We even caught a yellowtail that measured 26 ? inches. The fishing both north and south of the island has been very good. Last but not least, we have been catching grouper on almost every trip, but nothing really to write about. Also with the great calm weather, we haven?t been able to put up the kite, and thusly the kingfish haven?t been cooperating for us either. What are impressive of the Bahamas though, are the reef predators. You can be catching yellowtails and then the predators move in and if you want you can catch them as well. First come the barracudas, then the kings, followed by the amberjacks and ending with the different variety of sharks. There are definitely a lot of species to be targeted when you are over there.

The fishing here has been OK. It hasn?t been red hot, but it?s hasn?t been that bad. The few trips we had last week, we basically went dolphin fishing and one trip we came back on the reef in the afternoon. There have been dolphin offshore, anywhere from 5 to 20 miles offshore. Most of the schools have consisted of the really small dolphin. New dolphin regulations are in place and dolphin must be 20 inches in fork length. The maximum amount is also 10 fish per person. Many of the dolphin right now are right at that size or even smaller. The good news is dolphin grow extremely fast, so in a few weeks we should start seeing bigger fish. The fishing on the edge for us was pretty good when we had some wind. After dolphin fishing in the morning, we came in on the reef and caught some bonitas, a blackfin tuna and a sailfish along with some kingfish. The action was pretty good and pretty consistent.

I haven?t gone swordfishing in these past two weeks, but have 4 trips planned next week. From what I hear, the swordfishing slowed down on the backside of the moon, which is pretty typical. I would expect the swordfishing to pick back up in the next week. So far this has been a great year for swordfish, and quite a few large fish have been caught already. Hopefully we?ll be able to give you a good sword report next week.