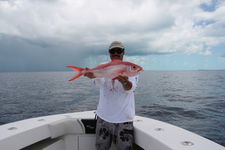 The past few weeks have been pretty slow as far as charters. I did a couple of trips to Bimini and the fishing there was OK. The yellowtail fishing was a little bit slow but still plenty good compared to the fishing for yellowtails back home. We fished a few different areas from the Gingerbreads all the way south of Sandy Cay. The yellowtail fishing was the best in the Gingerbreads and we also caught a few big kingfish there. On both trips we tried some deep dropping and that was excellent. We caught a variety of species from mystic grouper, snowy groupers, yelloweye snappers, queen snappers and more. I actually had a lot of fun doing that.

Back in Miami, we are still waiting for the late summer push of dolphin offshore. The guys in the Keys are catching them so it is only a matter of time until they show up here. I have been daytime swordfishing a few times in the past couple of weeks. It has been hit or miss and mostly miss on my part, but we did catch a nice fish in the 275 pound range and also had a fish pushing 400 on the leader. The bigger one put up two amazing jumps when we had her on the leader. It was quite impressive. The sword bite though is definitely getting better and in my opinion is about to explode in the next few weeks, if not even sooner. This is the time of year that it went off last year. We did caught a huge thresher shark the other day while daytime swording. That fish, which was released, was in the 450 pound range. I also heard of a few other threshers caught last week. This is another good indication that the day bite is about to explode. Last year in August and September the threshers had shown up and were followed by the big swords within a few days.

If you havent experienced the rush of seeing a big swordfish during the day, from now until winter is the time. The seas are generally calm and the big fish will be here. I am also already booking trips for the winter sailfish season, so if you have your plans in motion, give me a call so we can secure your date.