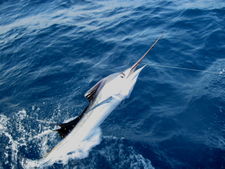 Fishing has been a bit on the erratic side. There has been a consistent wind out of the West and Northwest which has pushed dirty green water on the edge. There has also been a lack of strong North current which is a major key to good sailfishing. On the other hand, since my last report, we have had a few days with north wind and strong north current and clean blue water. Those days we caught as many as 8 sailfish in one day. Even with the green water and slow current, on average though, we still have been managing one or two sailfish per trip. As we get more into spring the prevailing winds from the east and southeast should resume and that will definitely clean the water up and bring in some better Gulfstream water with north current. Last year, the spring sailfish bite was epic and we had many double digit days in April and May. Those days will be here soon.

There have been some kingfish around and that should only get better with bigger and more kings each day. The dolphin bite has been erratic as well and one day you may catch 10 or more dorado and then not even see one for a few days. This should also improve and April is usually the month that we see the biggest dorado on the edge.

The one thing that has been plentiful have been the bonitas. Although not very edible, they are great fun on light tackle. At times they may seem like a nuisance, especially as you are waiting for a sailfish bite, they do bend the rod and can put your angling skills to the test. There have also been some big bruiser amberjacks on the wrecks.

We have not done any swordfishing either day or night since the last report and have not heard of many people venturing offshore for swords. I also have not done any tarpon trips since my last report, but the bite has been very good in Miami with many boats getting 5 to 10 shots at big tarpon in a 4 hour late afternoon/evening tarpon trip.

April and May can be the two best months for fishing on the edge in South Florida. Besides lots of sailfish, there are also big kingfish, big dolphin and blackfin tuna. The majority of dates are already booked for April, although I still have some opening and have more openings in May. Dont miss out on spring fishing in Miami  give me a call and lets catch-em up.