A little Bit of Everything

As is typical for October I have done quite a few swordfish trips, trips on the edge, mahi trips offshore and our first wahoo trip to Bimini of the season.
Starting with the swordfish trips, we have had some really good trips and also some slow trips. A week or so ago we were getting 3 to 4 bites a day and landing as many as 2 fish per day. Our biggest fish was a bit over 300 pounds and we caught that fish on a pretty rough day in the Gulfstream with seas pushing 6 to 8 foot. Putting up with seas like that is definitely uncomfortable, but when you get a swordfish like the one we caught it was well worth it. The fish fought hard on the bottom and then rose quickly (as most big fish do). Once on the top, the swordfish charged the boat two times as if meaning to ram us and then did a stupendous jump completely out of the water. He then raced back to the boat, but as he was running down the side of the boat, I was able to get a great dart shot and it was game over. On the other hand, this past weekend the swordfish bite was pretty much non-existent. We did a trip on Friday with not even one bite and did another trip on Saturday in which we did get a bit but werent able to stay connected. It was slow for almost the entire fleet as I only did hear of one fish caught. Still it's the one fish that was caught that keeps us going, knowing that the next fish could be ours. We are in the peak season for swords so I am absolutely sure it will pick up again this week.

The mahis fishing offshore has still remained good although I see signs of it fading which is typical in late October. We have had a persistent weedline about 18 miles offshore and earlier in the week there were plenty of mahis on it but as the week progressed the mahis seemed to have moved on. Most of the mahis we will catch from this point forward will be on the edge just like the ones we caught a few days ago.

Fishing on the edge is in a transition phase. We had our first cold front of the year and that will start moving the sailfish south. We did catch a sailfish on one of our trips on the edge this past week, but it has mostly been a few kingfish, some mahis and a few sharks, including a beautiful tiger shark we caught a week or so ago.

I also mentioned that we went wahoo fishing in Bimini last week. Although we did not crush the wahoo we still caught a few and the good news is that they were all between 35 and 45 pounds. We had scheduled a two day trip, but the weather was not feasible to cross on the first day so we opted to do a one day trip and it paid off as the seas were perfectly flat and we had a great run there and back and caught some great fish while we were there. I am heading across again tomorrow for a couple of days and hopefully will catch a few more hoos.

Now is definitely the time to book your winter sailfish trips and also your wahoo trips. I have plenty of dates open but already have dates booked as far out as March and April. Look at your calendars and lets set up that date and see if we cant go double digit on sailfish releases! 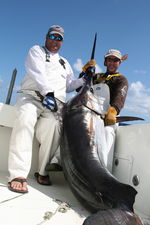