The fishing so far this year has been OK. I wouldnt call it bad but not spectacular either. Sailfishing has been good but a little bit inconsistent. We have caught sailfish on every one of our full day trips, or at least had several bites, and also caught sailfish on the majority of the half day trips as well, It doesnt sound bad but the inconsistent part is that one day we will catch 7 out of10 sails and then the next day well only catch one or two. In the past week it has gotten a little bit better as we went 7 for 10 one day 6 for 9 another day, 3 for 3, 5 for 8 but also had a 1 for 1 day and a 0 for 3 day. Still a good amount of fish but we are lacking the cold fronts which will make double digit releases a bit easier to get. Without the cold fronts we are also not seeing a lot of multiples, but mostly single and double headers. You know me, I love when we get 3, 4 or 5 sailfish on at one time. It is total controlled chaos and I love it. The good news is that almost all the sailfish are the full grown size in the 50 to 60 pound range. We even caught one today that was pushing 80 pounds. I also think it is going to get a lot better as the past few days we have had the best looking water (purple blue with strong north current) of the year. If we can manage to get a few cold fronts, the sailfishing is going to go off the scale. 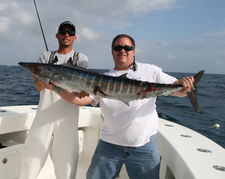 Besides sailfish there have been just a few mahis and some kingfish. We did catch a big king over 40 pounds last week and also caught a 35 pound wahoo that day along with half a dozen sailfish. Now that is a good day. A few other boats have been catching some wahoo as well, which so far this year have been a welcomed surprise.

Unfortunately this year I have not been able to take advantage of the early cobia run. Most of the days that the water has been clear on the inside we have been targeting sailfish which is fine. We cater to what the customer wants so if you decide to book a trip just let us now your target species and Ill do everything I can to get you that species.

I also have not done any swordfishing for the past month or so, but I do have one trip dedicated to that this week. Hopefully the swords will cooperate. I havent heard of any sword reports as most of the boats fishing this time of year are targeting sailfish on light tackle.

January is pretty much booked up although I just got a cancellation for Jan 20 and 21st. I also have the 28th and 29th open. Other than that I have pretty much fished every single day this month. I do have some openings in February as well. This is a great time of year to fish in South Florida and trust me once we get a cold front or two, the sailfishing will go off. Dont you want to be out there on a crazy hot bite and get double digit releases?