Bountiful in the Bahamas 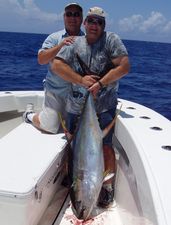 Well, we are back from the Bahamas, but are slated to leave again tomorrow. The last two weeks have been great! I have been in Bimini, Chub Cay, and Andros Island in the Bahamas. The fishing has been great. A good friend and customer, Roger, was with me for most of the trip and him and his family were absolutely fantastic. They were fun to fish with and I was ecstatic to put them on some quality fish. We also fished with other customers in Chub and Bimini and they were terrific too!

The highlight of the trips was definitely the yellowfin tuna and the release on the blue marlin. We also had some great dolphin action and some decent bottomfishing as well. The yellowfins were abundant and good size. Our largest yellowfin tuna weighed in at 105 pounds. It was caught on 30 pound tackle and gave a magnificent fight. We caught many more tunas from 100 pounds to smaller 30 pounders. The majority of the tuna were 40 ? 60 pounds. The dolphin action was fantastic as well, with our biggest at 35 pounds and most in the 20 ?30 pound range.

We also got a pleasant surprise by a blue marlin in Chub Cay that was released 10 feet from the leader after a great fight. It ate a red and black softhead and was bill wrapped. We caught that fish on 50 pound tackle and I had my hands full clearing the other lures while keeping this fish tight.

Last but not least was the bottom fishing mostly for yellowtails. The yellowtail action was very good one day and decent the next. The size was down a little, mostly 1 ?3 pound tails with very few approaching true flag size. The good news is that a buddy of mine just got back from Bimini today and told me that the big flag yellowtails moved in and were plentiful.

As mentioned earlier, we are off again tomorrow and will be back for the 4th of July weekend. We are fully booked this weekend here in Miami but I do have some openings in the next two weeks. We will be dolphin fishing while we are here and hopefully will get some swordfish trips in as well.