Sorry for the delay between the reports but it has been extremely busy. I have fished practically every day, plus had a tournament, and have another one coming up this weekend, the Miami Boat Show was in town and I had The Billfish Foundation Awards dinner to attend. I was lucky enough this year to win 2015 Top Release Captain for Atlantic Sailfish and also Top Pro Release Captain South Florida Atlantic Sailfish Circuit. I was fishing everyday and unfortunately did not make it to the Miami Boat Show but I heard the new venue was a big success. There were some traffic issues the first day but those got ironed out on the second day. From what I have been told the SeaVee Boats booth was amazing especially with all their sea trial boats right behind the booth.

Now to the fishing part, for the most part it has been ok but there have been some day where it has been extremely slow. That would be OK if we had some phenomenal days mixed in, but we really havent. We are still averaging a few sailfish per day with our best day at 6 sailfish releases. But we also had2 days were we didn't catch any sailfish which is not what you would expect for this time of year. The good news is that there is new water moving in and bring with it blue color and north current. Starting with today, we have also seen an increase in the amount of baitfish found offshore, mostly flying fish and ballyhoo. Those three things will definitely increase the number of sailfish in the area. Also, the same thing happened last year where January and February were not up to par, but March and April were phenomenal. That is exactly what I am expecting for this year as well.

I also mentioned sailfish tournaments and we did fish our second tournament a few weeks back and it was a slow tournament. The lead boat caught 10 sailfish which for a two day tournament which only averages 5 sailfish per day. Most boats caught 3 to 5 sailfish in two days (slow) and that is where we fell  just sort of middle of the road. We have another tournament starting tomorrow and our hopes are high that we will do a lot better.

Besides sailfish, there have been some mahis on the edge and have been eating the kite fished live baits. Only a few kingfish to mention and an occasional wahoo. I did hear of one or two yellowfin tunas caught and also heard of some guys seeing those big bluefins moving through. This is the time of year we almost always see or hook one of those bluefins but with 20 pound test mainline and 40 pound leader, the fight is usually pretty short resulting in a chafed off leader or a busted mainline.

March is almost always a great month to fish in South Florida and I still have plenty of openings left. Now is the time to call and lets go catch some fish! 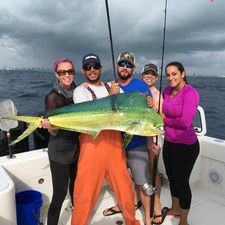