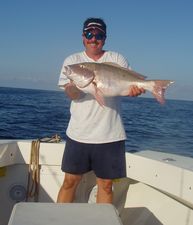 What a week of great weather. We took full advantage of the calm seas and made a few swordfish trips, followed by a Bimini trip, and ending with a few more swordfish trips.

The trip to Bimini was a blast. With seas of 1 foot or less, we made the crossing in a little over an hour. We checked in to Customs, and then proceeded to go fishing. We did well with the yellowtails. At one point, the yellowtails were all averaging 3 to 5 pounds. The sharks showed up and slowed the tail fishing done. We also caught some muttons and some groupers.

The highlight this past week was the great swordfishing we had. In a total of 4 nights we had 20 swordfish hooked up. We ended up catching 8 and only kept 2. Of the ones we released, we did release few very nice fish over 100 pounds and as big as 200? Another awesome part to this weeks swordfish adventures, is that we baited at least 8 fish on the surface. Either as free swimmers swimming in the light, or swordfish following baits being reeled up, we actually watched quite a few swordfish eat a bait right next to the boat. This is nothing but incredible. On one fish, well over 150 pounds, we could actually see the fish turn sideways, open his mouth and eat the bait. We fought him for a bit, got a legitimate leader release, and then he pulled off. We had a few fish pull off after 15 minutes or more than right next to the boat, but what a sight to see them swim away. Our smallest fish was around 40 pounds (released) and our largest was somewhere between 180 ? 220 pounds. We fought this bigger fish for a while and then about 50 yards in front of the boat did an amazing jump straight out of the water. His body completely cleared the water and was perfectly straight up and down, bill in the air and tail 5 feet of the water. I estimated the fish at 180 pounds, but both my mate and all my customers estimated him well above 220 pounds. Ten minutes later gaff and harpoon at the ready, the fish was next to the boat, the double line was out of the water, my mate was about to reach for the leader, when in a fraction of a second he was gone. The hook just pulled. Although a bit disheartened, it is the thrill of the fight we are in it for and we got to release another great fish. Maybe we can catch her next year, when she grows well over 300 pounds.

Beginning on Thursday, I will be in the Bahamas for close to two weeks, so my next report should be filled with Bahamian adventures. After that we have some more swordfish trips scheduled.

I?ve been saying it for a while, but book your summer swordfish and Bahama trips now, time is running out, as my calendar is getting full!

Good luck to all and enjoy this great weather that is due to be around for a while.