Just as I predicted, the sailfish action in the spring was going to take off and it has. Last year March and April were better than January and February, and the same applies this year. We have seen some decent sailfishing in the past two weeks and also experienced some great sailfishing this past weekend. This past Saturday we went 9 for 9 on sailfish and on Sunday we went 17 for 18 on sails. Those are some great numbers and just as impressive is the hook up ratio. It helps when the fish cooperate, but I truly believe in the new Eagle Claw Poseidon hooks and the Sufix fluorocarbon leaders. As I have mentioned plenty of times in the past to put up numbers like this, the conditions need to be ideal with strong north current, a brisk north wind and blue water, and we had all those conditions. Although the fish were tailing on Sunday and we did get some shots at tailers, (tailers are when the sailfish surf down the waves and you are able to sight cast to them) most of our bites where on the kite baits. Especially in the afternoon, we probably never had a bait in the water for more than 2 or 3 minutes before it got eaten. Although big numbers are fun, we could have caught more sailfish if we had more anglers (we had 2 anglers) and also if we had more bait. The fact is that I had two great guys that have fished with me for many years and we have had awesome days together, but so far this is the best trip yet and it is especially rewarding to me that I was able to share that day with such good customers.

Besides sailfish, there have been a few kingfish around although still a bit spotty. One day you can catch your limit of kingfish and the next day only one or two. The good news is that the bigger kingfish are starting to show up and it is usually in April that we see the 40 and 50 pound kings. There have also been mahis on the edge and some up to about 25 pounds. I did see a few in the 40-pound range at the dock cleaning station.

We are still waiting for the spring run of blackfin tunas, but I can guarantee you it will start within the next two weeks and late April and especially May will be great for them. Not o many cobias were caught this year and although we have another month or so left, I am not that optimistic about them. We also had one group that did a lot of vertical jigging but that was painfully slow with only one amberjack and some smaller almaco jacks for all their efforts. We did catch sailfish with me though on all our trips.

BTW- I just installed the new Mercury Verado 350 engines on the boat and all I can say is OMG! Besides increasing a bit in speed, the fuel economy is amazing. I literally gained an amazing 20% increase in fuel efficiency, and the amount of power and torque is awesome. Wait to you guys feel the power the boat has now!!

Springtime is my favorite time of year to fish and April and May are my top two months. Not only are the sailfish around, but also the big kingfish, mahis and tunas are all here these two months, which makes for quite a bit of variety. April is ¾ full already but some dates are still open and there are plenty of dates in May. Also now is the time to look at the summer schedules for trips to the Bahamas for yellowfin tunas as well as muttons and yellowtails. So give me a shout and lets get those trips scheduled! 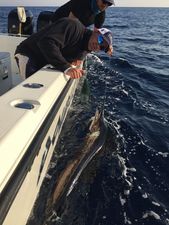