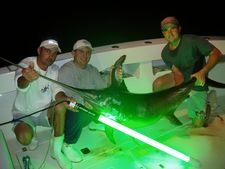 The fishing during the day and at night has been good. The night swordfishing has actually been good for a while, but it is the day fishing that has improved quite a bit. For starters, we have caught one or two sailfish on every single trip, but one, and the one trip that we didn?t catch one, we actually hooked one and got a few jumps out of him before the hook pulled free. Our sailfish have been caught mostly on the kite baits, and when the wind has been light, we have had to resort to attaching helium balloon to the kite. It has been paying off though. Besides sailfish, there have been quite a few dolphin on the edge. The edge has been out deep (200-350 ft). One day the dolphin were all in the green side of the edge, but for the most part they have been on the blue side. The size of the dolphin have been decent with the size varying from 5 pounds to 20 pounds. Again live bait has been the trick. Besides the dolphin we have also been catching a few kings every trip and a wahoo here or there. Unlike earlier in the month, the fishing has been consistent and although it is not red hot like it will be in a month or so, there has been plenty of action to keep the rods bent and for everyone to have a good time.

The night fishing for swordfish has been very good. We had the Miami Swordfish Tournament a week or so ago, and we ended up in third place. This is the second time in two years that we got third in this tournament and we also got third place in the Islamorada Swordfish Tournament a month ago. I will gladly take third place in any tournament, especially considering your are fishing against some quality teams. With that said though, we are striving and going to work even harder for first place next year. Besides the Miami Tournament, we have had a few swordfish charters since then and have caught swordfish on all our trips. We had one memorable trip in which we caught three swordfish by 11:00pm. We tagged and released on and kept one 150 pounder and another one at 180 pounds. The bite on the 180 pounder was wickedly cool as we baited that fish in the light of the HydroGlow. It was cool to watch this decent size sword eat a bait right out of my hand. When I say eat, I should say inhale, because there was no playing here. This fish charged the bait and ate it and then hauled butt real quick. The speed of these fish still amazes me. We had quite a bit of drag on this fish, and it still took close to an hour to boat it. It was no doubt, a lot of fun.

Winter season is approaching, so book your sailfish trips early. Also if you are interested in fishing any of the sailfish tournaments, give me a call as I have a few openings for those.