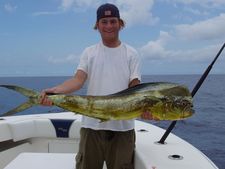 Although Hurricane Dennis was not a threat to South Florida, winds associated with this storm have kept us on the dock. This gave me a chance to catch up on an article I needed to write as well as my fishing report.

The past few weeks have we have been dolphin fishing. There have been a lot of dolphin offshore, but unfortunately there have been a lot of little ones. The dolphin have been mostly under birds anywhere from 6 miles offshore to 25 miles. When you find the birds diving, they are usually with a school of dolphin. Although most of the fish have been small, they have been huge schools of them. The new regulations are 20 inches from the fork of the tail to the lower jaw. Many of these fish have been at that size, some smaller and some bigger. I have seen way too many anglers catching these small dolphin by the bucketful and keeping them. Either some people are not aware of the new regulations or don?t care. It is best that we release these undersized dolphin. Hopefully even if a small percentage of these dolphin make it to next year, we should have a great season of bigger fish. Dolphin grow extremely fast. The way we have been tackling dolphin fishing has been by running and gunning until we find a school of fish. If the school we find consists of small fish, we catch a few of the legal ones for dinner and then release the rest. We then move on to find another school of hopefully bigger ones. At least this way, you can still have some fun on light tackle, keep a few legal fish for dinner and leave the rest to grow up for tomorrow.

We also had a swordfish trip last week and were successful on that trip. Since I was in the Bahamas for most of the month of June, I was really excited to get out and do some swordfishing. I was more excited to have our first fish on and eventually in the boat. We did see a nice sized sword of close to 200 pounds swim into the light and under the boat. He was just cruising, as the sword didn?t stick around at all. It still was a great sight to see. I have quite a few swordfish trips already booked for July and August and I am booked for the Islamorada and Miami Swordfish Tournaments as well as the Dark Side Part II Swordfish tournament.

That?s it for now; we?ll let you know how the next few nights go. We are also slated to go to Bimini next week, so I?ll have an update from there as well.