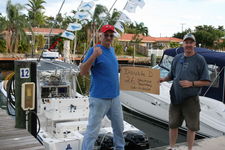 The sailfish bite has been pretty good for the past two weeks, but I never anticipated that we would see the type of action we saw yesterday. Before we get to yesterdays bite, like I mentioned, the sailfish action has been pretty good. We had one more double digit release day since the last report and also had quite a few days where we caught anywhere from 3 to 8 sailfish per day. What was bothersome though, was that we were missing a lot of the bites. One day we went 10 for 21. That is we had 21 sailfish on and only managed 10 releases. Another day we were 3 for 8, etc. All I can attribute it to was that the sailfish were very aggressive and eating the bait and jumping almost immediately. This aggressive bite doesnt allow the circle hook to get lodged in the corner of the mouth like it should. We were also getting a lot of sailfish that were bill wrapped. That is when a sailfish swats a bait with his bill and the leader wraps around the bill and the hook never gets in his mouth. We tried different approaches, but nothing seemed to help. Many of the other captains were also seeing the same type of results. I knew it would just be a matter of time and things would get back on track.

Well not only did things get back on track, but I witnessed the best sailfishing I have ever seen off of Miami yesterday. We ended up catching 26 sailfish out of 31 that we hooked. Not only was our hook up ratio good, but 26 sailfish releases in one day is my new record for sailfish releases and also a boat record!

We started the day with catching bait and then heading out the inlet. We were greeted with purple blue water, 3 knots of North current and a NE wind of 15-20mph. For those that know about sailfishing, these are absolutely the best conditions you can have. With the N-NE wind against a North current we also had a swell in the wave. When this occurs, you get tailers. Tailers are sailfish that cruise the top of the wave with the tail fin sticking out. Their dorsal is closed and they are cruising the top of the wave. With a swell, you can see the tailers in the waves themselves. Without any exaggeration, we easily saw 90 sailfish that day. We would have the kites out and you would see the tailers cruising down the waves. We would then position the boat to get our baits right to them and most of the time we would get hooked up. We also cruised along the trough of the waves and when we saw tailers, we would cast spinners to them or pop the kites out and get the baits to them. It was definitely a very exciting day on the water. My customers were absolutely great and both of them had a great set of eyes and were spotting the sailfish just as fast as we were. It was definitely a team effort and my hats off to Steve and Gregg our customers and to my mate  Leo, who did a great job all day long. It was the most sailfish I have ever seen in a single day and also the most I have ever caught in a single day. It will be a day that is burned in memory forever.

Although I wish every day can be like this, it only happens once in a while, but unless you are out fishing, you may never get to see it. What I can say is that, come down to Miami and book a t trip and we will try as hard as possible to get you on fish and to make it a great day on the water.