For the better part of January, the sailfishing has been very slow. Everyone was complaining and was wondering what was going on. It simply was a lack of cold fronts to get these fish moving again. Well last week we had three cold fronts in a row and we also had north wind, blue water and north current. All those things combined could only mean one thing and that was fantastic sailfishing. I had my good friend and part time guide (Rimmer Covington) out of Louisiana come down and charter us for a few days of sailfishing. Rimmer bought his dad and a couple of friends to join in. The first day we got off to a really late start, and started fishing around 1pm. We had west to northwest wind with good north current and blue water. By 3:30-pm we had already caught 5 sailfish. Those 5 sailfish were more sailfish than I had caught in the prior week and a half. The next day we got off to a regular start in the morning and the conditions were even better with a strong north wind and still a lot of current and blue water. We hooked up almost instantly and ended up going double digits and catching 10 out 11 sailfish. The fish were tailing that day and we did catch some tailers that we could pick out by riding in the tower. We left around 2:30pm because Rimmer wanted to see SeaVees new bay boat, which is a beast of a bay boat. You really need to check out this boat.

The rest of the week was just as good and our best day we got 15 sailfish bites plus a bunch of mahis and a few kings. Even when the wind slowed down, the current and blue water were still there and the sailfish continued to bite.

So as dismal as it seemed a couple of weeks back, all it took was a bit of cooperation from Mother Nature and now we are in full swing for sailfishing and have actually seen one of the best weeks of sailfishing that I have seen in quite a while. Of course there will be some slow days, but now that the fish are moving again, we should see some pretty consistent fishing.

Besides the sailfishing, there has also been a decent amount of mahis caught. Most of the mahis we caught were larger schoolies although I have seen some nicer gaffers and slammers at the dock. Its always great to catch a few mahis kite fishing while waiting on the sailfish bites. There have also been some decent kingfish around and most of the ones we have caught have been 15 to 30 pounds, so a bit on the larger side.

Forecast looks great with more cold fronts scheduled to roll in next week. The Miami Boat Show is in a few weeks and I am pretty much booked up for that, but I do have some openings both this week and next as well as after the boat show, so give me a call and lets take advantage of some great winter sailfishing. 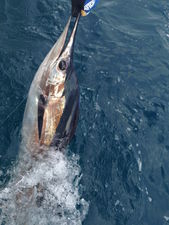