Double Digits are Back!

After a summer of hot weather in Miami, we are finally getting the best weather of the year with nice cool mornings while warming up during the day. I know when I have to put on a jacket in the morning, it means only one thing, and that is, it is finally sailfish season in South Florida. In the beginning of November we had a very good sailfish bite. I had one trip with one of my best clients and good friend Joe. It was just him and I on the boat that day.. We caught bait which was plentiful and headed out to the edge. We had nice north wind with blue water and decent north current. It certainly looked good. We started off the day with a double header of sailfish. After that it went quiet for a few hours. With the conditions the way they were, I certainly thought the fish would be chewing. A little after 1:00pm, we caught another double header. A short while later we had another double. We were 6 for 6 and it was shaping up to be a great day. I set the baits back out and looking at the short bait; we had three sailfish trying to eat the same bait. We hooked up with one sail, followed by another hook up and followed by yet another. We now had a tripleheader going. Seconds later we had a fourth one on and followed by a fifth one. Talk about mayhem, we had 5 sailfish on screaming in all different directions with only me and my client on board. With a lot of shuffling around we managed to catch 3 out of the 5 sails. We now had 9 fish total but I wanted double digits so we put them back out and the flatline gets eaten and we know had our 10th fish on. We caught that sailfish and ended the day 10 for 12. It was the first double digit day of the season and not to shabby being that it was only early November. Since that trip we have caught sailfish on every one of our full day trips. The bite has slowed down temporarily as the current has faded off and is even going south and the water has dirtied up a bit. Unlike wind which can be predicted, there is no prediction on current as it can change day to day. The good news is that the strong flow and closeness of the Gulfstream usually pushes blue water with north current onto the edge it I will bet that current will be back within days. 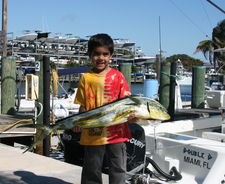 Besides sailfish, there have been an impressive number of mahis around. The mahis are all large schoolies to gaffers with most of the fish between 8 to 15 pounds. When the wind was still out of the east and northeast, there we very large schools of mahis just hugging the color edge. Up in the tower riding the edge one day, I saw a few birds diving on some patches of grass and there were at least 100 nice size mahis picking in the weeds, We caught close to our limit and left.

There have also been some kingfish around and well as some spanish mackerel. This is also the time of year when we should start seeing the african pompano on the wrecks and hopefully well get a few trips to target them. Pretty soon the cobias will also start showing up and that is always a blast.

The holidays are coming very quick so now is the time to book your trips. I still have a few days open between Xmas and New Year but they are going fast. Also if you need to find that perfect gift, I offer gift certificates for either full, ¾ or half day fishing trips. So if you know someone that loves to fish and you just cant find the perfect gift a day on the Double D may be it!