The End of an Era

The new boat is on its way and is actually at the Fort Lauderdale Boat Show. That means I finally turned in my current 34 SeaVee and its is getting detailed, new cushions, etc. and getting ready for her new owner (boat is already sold). All I can say is that boat caught so many fish for my clients and me. I had her for 4 years and she caught countless of sailfish and earned me Top Captain  Atlantic Sailfish Release endorsed by The Billfish Foundation, she caught blue marlin, white marlin, a ton of mahis, wahoo, tunas, swordfish and so many more. It was the best boat I have ever owned and even to the last day, she kept catching fish. The new boat is going to be even more spectacular with triple 350 Mercury Verado, the latest in Simrad electronics, a full tower and so much more room. I have big plans for the new girl and I am sure she will catch lots of fish. So basically from now on, anyone booking a trip will be on the new ride!

The past week or so I have been doing a lot of daytime swordfish trips and I have to say it has been one of the best weeks of daytime swordishing I have had all year. The first trip was a bit over a week and a half ago and the wind was howling. I had relayed that information to the charter, but since they were from out of town, they elected to battle the rough weather and give it a shot. As always, my SeaVee got me out there safely and in comfort and soon we started fishing. The bite was a bit slow but we then got a big hit and got tight on what seemed like a really big fish. Unfortunately and sometimes due to the rough water, we pulled the hook. Even after backing off the drag after the initial hookset, sometimes when the boat rolls sharply from a big wave, it is often enough to pull the hook on a fish that is know to have a soft mouth. The next swordfish trip was with Pablo and his girlfriend and they had waited over a year for this trip and it definitely paid off. Our first drop was money and we hooked up right away and landed a decent swordfish. The second drop we hooked up right away again and this time released a small swordfish. We then had two more bites that we missed and our 5th drop we landed another decent swordfish so we finished the day going 3 for 5 on swords. All I can say is Awesome! The next three day I had a great client, John from Massachusetts, who has been fishing with me for probably over 10 years. He has had a few double digit release sailfish days with me and has caught swordfish up to 400 pounds with me and swordfishing is what he loves to do. He also told me that we had a streak going and had caught at least one swordfish on every trip together. The pressure was on. He bought his friend Gregg who has also fished with me before and Gregg was with me one day when we had 26 sailfish releases. Either way both guys are good luck and great clients. Needless to say we did catch a swordfish on each one of or three trips and the biggest was right under 200 pounds. It was the last three trips on the old boat and again she produced to the very end and I got to fish my last three trips with some special clients.

With all the swordfishing I have done this past week I have not fished the edge, but can tell you from the reports that the sailfishing is very good. There were quite a few boats with 8 to 10 sailfish releases a day and most had 3 to 5 sailfish releases. There have also been mahis and decent kings on the edge while kite fishing. This upcoming week I will be working at the Ft. Lauderdale Boat Show. Once the show is over I will have the new ride and already have a bunch of trips planned. I still have a few days open in the later part of November and a few days open in December, so give me a call, lets check out the new 37 SeaVee and most importantly lets catch some fish! 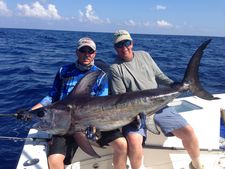