We are heading into the last week of August so summer is almost gone. The fishing this summer was pretty good. Mahi fishing was not as good as the past few years but it was decent and most importantly it was consistent. There were not many record breaking days and not a ton of big fish caught, but all our mahi trips did produce fish. The best news is that even though it's the end of summer, the mahi fishing right now is the best it has been all summer. We have a late season push of a lot of mahis and a lot of decent size fish as well. This will hopefully last well into September. 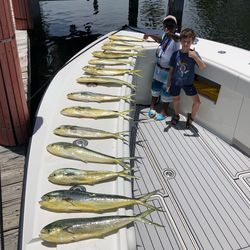 The best news from this summer was the amount of resident summer sailfish around. If we had the right conditions with north current and blue water, it was almost a guarantee to catch at least one sailfish per trip. We had a few days with up to 3 and 4 sailfish bites per day. This bodes well for our upcoming sailfish season, which I canât wait to start. 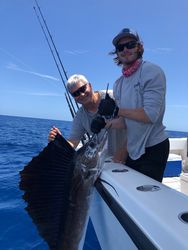 Another good aspect of this summer was the fishing in the Bahamas. We had a number of trips over there this summer. Earlier in the summer the mahi fishing and the tuna fishing was excellent. As we got into July and August we targeted snappers, mostly yellowtail snapper, and that was very good. Every spot we fished produced fish and even spots that were not very good the past few years were back to producing fish. This is so important because we all know that fish populations may not be as healthy as they were in years past, but seeing improvements shows signs that species can recover if given enough time.
Another positive sign was the amount of wahoo caught this August. The full moon in August is usually a very good month to catch a wahoo in South Florida. You can either troll with a planer or downrigger or drift live baits on the edge and get at least a wahoo bite every morning. This should bode well for our upcoming wahoo season in the Bahamas, which usually starts in September, so we are mere weeks away from that. 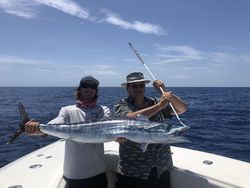 The one fish I didn't really have any trips for this summer was swordfish. There were some swordfish caught in July but just around mid August the sword bite has been on fire. Traditionally the sword bite picks up in the fall, so hopefully this is an indication it is starting earlier and everyone knows my passion for catching these fish, so I cant wait to get some more swordfish trips booked.
So although summer may be over soon and kids are going back to school, we are seeing the best late summer fishing right now. I would highly recommend booking a fishing trip for mahis or for swordfish or a combo trip for both while the fishing for those species is red hot. Give me a call and lets set it up, after all you canât catch them from the couch?