Is It Really The End Of Summer

September usually indicates the beginning of fall but here in South Florida itâs usually just an extension of summer. The way the mahi bite has been the past few weeks, it might as well be the middle of summer. Since mid August, we have seen the best mahi bite of the season. Not only are the fish bigger, but there are way more of them. Typically, our best time for mahis is June and July, but just like the past few years, this year itâs going to be August and September. Everything seems to be shifting to later in the year, just like peak sailfish season is now March-April instead of January -February. 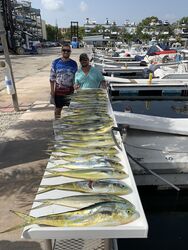 Whatever the case may be, we will adapt to it and take advantage of it. There were also a few days last week that a lot of wahoos were caught. Unfortunately, I was not out because wahoo is one of my favorite fish to catch as well as eat. There were two hot areas for wahoo. One was trolling planers on the edge with either spoons, bonito strips or rigged ballyhoo. We use a windon planer soon enough you get the planer off the mainline and you can continue to wind the fish in without having to hand line the long leader. Makes it much more sporting as well as safer and less pulled hooks. The idea of the planer is to get your bait down deeper in the cooler water and that is where the wahoos are lurking. If you do troll planers, be ready for an onslaught of bonitos and also some kingfish. Yesterday we caught 15 bonitos in less than an hour. Thatâs a bonito every 4 minutes. The other area for the wahoos was underneath anything of size floating in the Gulfstream. Then you can either troll a planer by the âfloaterâ or drop a jig or live bait down deep. These wahoos are almost always smaller in size but make up for it in numbers.
Now that we are in September, mahi fishing should continue to stay very good and we will start to see an increase in the amount of swordfish being caught. We did have a swordfish trip recently, but unfortunately, we didnât get any sword bites. On the way home though we did catch quite a few nice size mahis. Sword fishing usually will get very good sometime beginning in September and last well into December. Last year it lasted until February. I am really looking forward to a good year as we just purchased a new Penn 80 with a Hooker detachable electric drive. So now we have two of these setups with one for our main line and one for our buoy line. In canât wait to put a big fish on board with this new reel. Itâs been quite a while since we caught one over 400 pounds, so letâs go and see if you are that lucky one.

On a final note, I know this has been a difficult year for many, but one positive outcome is that people are really starting to enjoy being outdoors. It is a lot safer to be outside in clean ocean air instead of being indoors, but it should not have taken a pandemic for people to realize how beautiful and safe it is to be in the outdoors. Come on board and enjoy a beautiful day outdoors and breathe some clean fresh ocean air! I do it every day and canât get enough of it!