The End Of Summer Is Near

Synonymous with summer in South Florida is mahi fishing. So far though that has not been the case. Last year mahi fishing was slow until July and then it got very good in August. So far this year it has been a bust. There have only been a few mahis around and most have been small. There are days when you will find bigger schools and bigger mahis but not like it should be. Hopefully mid to end of August and even September will be better. FYI- we have seen mahi seasons like this before and it is all cyclical. There will be bad years and there will be good years. This year happened to be not so good.

Being that we are in South Florida though, when one fish isnât biting, we have plenty of other species to fish for. We have spent a few trips fishing on the edge which is what we normally do in the spring and winter. Last few trips on the edge we caught kingfish, bonitos and sailfish. Most people think of sailfish as a winter species, but we do catch them year-round in South Florida. We even had a half day trip a week or so ago where we caught 3 sailfish on that half day trip. 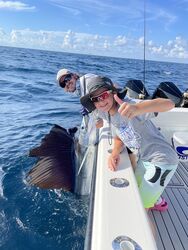 Another fish we can target, and prime season is rapidly approaching, is the swordfish. Swordfish are big game fish, and you will not catch one every trip, but you do stand a very good chance of hooking one and the fish can be of true quality size. Some may be what we call rats of 50 or so pounds but there are also the true gladiators of 300 plus pounds. The biggest swordfish caught around here was in excess of 750 pounds. The beauty is you never know what size of fish you will hook next. A few weeks back we had a trip where we did not catch one, but just this past week we caught a nice one around 240 pounds. 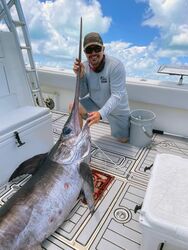 We only have a few days open this week for the rest of August. Beginning of September is fairly booked but by mid-September the calendar opens again. That will put us in prime time for daytime swordfish. Last year we also had a real good run of early season sailfish in September and had those big schools of sardines show up where we were catching tunas, mahis and sailfish on the balls of baits. To view the calendar just go to my website and use the book now button, pick any trip and the calendar will show availability. Booking a trip online with us is safe, easy and secure. Book now and letâs get out there.