May is over and as promised it was a great month of fishing with really good sailfishing, outstanding tuna fishing, decent kingfish bite and a bit slower than normal mahi bite. The sailfish bite was very consistent and the last week of May saw some good numbers. Our best day we went 6 for 6 but most days we had at least 2 to 4 sails a day. The spring sailfish are almost always the bigger fish as well and sometimes can be a handful on 20-pound tackle. 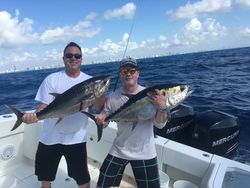 The tuna bite was very, very good. We get blackfin tunas here in South Florida and they were averaging somewhere from 30 to 35 pounds. We also hooked two Bluefin tunas and actually got a leader release on one on 20-pound sailfish tackle. The first Bluefin we hooked was on a threadfin herring on the kite. It was a cloudy day with a bit of wind and as we saw this 400 pound tuna clear out of the water and explode on our kite bite. At the same time we had one of those pesky squalls come. With pouring down rain both our kites fell into the water and we had a big bluefin tuna sizzling line off one of our reels. By the time Mike and I got the kites back in the boat (my hands are still cut from grabbing the braided kite line) we literally had maybe 10 wraps of line left on the Alutecnos 20 reel, which by the way hold 850 yards of line. Now its full steam forward trying to regain line on the reel as the tuna was staying on top. We got half a spool back and the fish sounded, luckily only in 300 feet of water. Then she rose to the top again as we chased her down doing 15 knots trying to regain as much line as we could. She sounded again and we played this game for over one and half hours. The last time she rose we were able to actually get the leader all the way to the rod tip and had the fish with 15 feet. We had a harpoon and gaffs ready, but the season for giants was closed by a few days so she ran some more line out and we broke her off. Just three days later we hooked another bluefin on 20-pound tackle and this fish was under the 73” limit and we probably could have taken her but after a 2-hour fight the mainline parted. We were close too and had her with 75 feet of the boat. Both great fights and memories that will be etched in everyone’s mind forever.

We also fished the Saltwater Shootout and out of 135 boats we ended up in 6th place with decent size kingfish and decent blackfin tunas. With that many boats fishing we were very happy with a top 10 finish.

The tunas and sails are still around but as we get into summer and the winds drop to nothing we will be switching gears and running offshore looking for the big schools of mahis. While we are out there we can always do a drop or two for swordfish, as there have been some around lately. Depending on what happens offshore on the way back in we usually stop and do a drift or two on the edge. If we are not fishing here in Miami, there is a very good chance we will be in the Bahamas and I actually have two trips planned there this month. So as you can see there are plenty of fishing opportunities available for the summer so give me a call and lets set it up.