Since the last report we have actually done a whole bunch of fishing and for the most part a whole bunch of catching. We have been in Bimini high speed trolling for wahoo, kite fishing for sailfish here in Miami and also deep dropping for swords here in Miami. Everything has been good with the exception of the swordfishing. Usually September through November are the best months for daytime swordfishing but this September the fish never got the memo and it was one of the slowest months I have ever seen. There was a 36-hour tournament (day and night) for swords and only two small swordfish were caught. We had three sword trips and on one of those trips we never got a bite, the other trip we had two sword bites and lost them both and the third trip we caught a big hammerhead shark on the bottom. That was about a week ago and since then I have heard of a few people going swordfishing with mostly slow results still. As I mentioned earlier, the fall is the best time for swords so hopefully they are just a little late in showing up.

The sailfishing though has been spectacular especially for September. Typically sailfish season starts in November but we are already having quite a few days with multiple sailfish releases and our best day last week we caught 5 sailfish and had another day where we released 4 sailfish on a half day trip. Besides sailfish, there have been a few kingfish, some bonitos and some blackfin tunas around as well. This is a really strong start and hopefully is an indication of a great upcoming sailfish season. 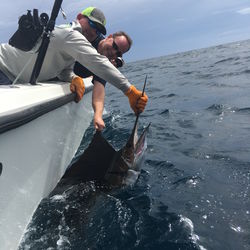 We also went back to Bimini for a two-day wahoo trip and we caught wahoo on both our days there. This has been another very good start since typically wahoo season doesn't get rolling until the beginning of October. We have quiet a few more wahoo trips planned and I am really looking forward to them. To me there is really nothing quite like the sound of the reel when a wahoo hits the lure at 15 knots. It is simply amazing! 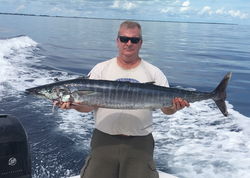 October is about 2/3 booked already and November is still quite open. Now is the time to plan your fall trips, so lets go catch some fish especially since they seem to be biting!