Summer is gone, kids are back to school and everyone is settling back to their routines. Routine though is the farthest thing from the truth when it comes to fishing in the fall in South Florida. The fall is always a transition period from the summer fishing to the winter fishing but the fall can offer some excellent opportunities before winter sailfish season is in place. For one, the daytime swordfishery is best in the fall from September through November. That being said, September though can sometimes start out slow as it has so far this year but just like years past, by the end of September the swordfishing is usually on fire. Just this past week we had two swordfish trips. The first one resulted in having two big fish on, but unfortunately we pulled the hook on both of them. The second trip, even though we had good conditions, albeit a very fast current - but were able to hold bottom well, resulted in no bites all day. But I guarantee you in the next few weeks the fishing will get better and a few of those big 300 to 500 pounders will be put on the dock.

Fall is also a transition time on the edge. The summer fun with bonitos is almost all over but in their place are kingfish and a few sailfish. I mention sailfish, but this past week in the Keys there was a very good sailfish bite with some guys getting into double digits and just today there were a few boats in South Florida getting double digits as well. Besides sailfish, there have also been quite a few small kingfish around as well as some decent wahoo.

Speaking of wahoo, its just about that time that we start wahoo fishing in the Bahamas and from a report I got today off of Cat Cay, there was a boat that caught 4 wahoo right up front and another boat caught 7 by Bimini. It has already started and I can’t wait.

I have 8 days still open in September and October is almost halfway booked already. Most of the trips are either daytime swordfish trips or trips to Bimini for wahoo as well as some trips on the edge. So as you can see, fall offers variety and we have a whole bunch of trips in line with that! Book those trips now while the dates are still open. 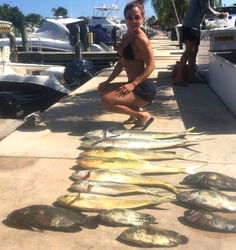