The swordfish bite in South Florida pretty much year round, but the hottest bite is supposed to occur between September through November. Unfortunately nobody told the fish it was September and for the past two weeks the bite has been very very slow, that is until yesterday! In the past two weeks we have done some half-day trips on the edge, which produced a few kingfish, small blackfin tunas, bonitos and an occasional sailfish. The rest of the trips were daytime sword trips and with the exception of yesterday we were not able to successfully land a fish. We did catch a big thresher shark on one of those trips. Most of the trips we had one or two sword bites, but were unable to keep the hooks in place. We also had two trips where we did not even get one bite, which makes for a long frustrating day. To top the slow start to the season, I also had two electric reels fail, fortunately none of them failed on a fish. Luckily I have three electrics, so we had plenty of backups. One of the reels was sent back and the other reel I was able to band-aid it until I can send that one back as well. We even hung the bottom one day and broke off all our line, so as you can see the frustration of slow fishing, broken reels, hung bottom, was really starting to take its toll.

The last two days I fished with Shane, who came all the way from Australia to catch a broadbill swordfish. The first day we did get a bite and had the fish on for a bit but the hook pulled. That was also the trip that we hung the bottom and lost our line. Our second day started out slow again. Obviously I want all my customers to catch fish on every trip, and since Shane had come all the way from Australia to catch one, the pressure to produce a fish was even greater. I tried everything I knew from dropping precisely on humps and holes, to making longer drifts over banks I knew held fish, trying different baits and even fishing two rods at once. Nothing was working and time was running out. Around 2pm we switched out the bait and put a whole rigged squid down. Squid is a great bait and is probably the swordfishs preferred prey, but it doesn't stand up to their brutal attacks and unless the swordfish eats the squid the first time, you usually only get a mangled bait on the hook that they dont go back to eat. I stitched the squid up as best as I could and sent it down. About 10 minutes into the drift, the rod gets heavy and bows over and it is game on. With heavy drag the fish is still pulling but we were able to gain a bit of line, but only a couple of feet at a time. It was mostly a stalemate for 15 minutes or so, and then Shane was able to gain some line. Halfway up from the bottom, she started rising and I knew we had a good fish on. Somehow we got her all the way up and got a look at her and my first impression as she was tailing down sea was that she was about 250 pounds. This fish was strong and stubborn and was flying all around the boat. She kept me on my toes and was constantly changing her angle and kept trying to get under the boat, swim to the props, and doing everything possible to gain her freedom. She was definitely putting our skills to the test. We got her within 25 feet and missed her on the dart shot. As Leo threw the dart, she dove backwards and with the white water from me having to reverse hard and keep her from digging into the props, it was a tough shot. She pulled all 150 feet off the reel and we started working her way back. A bit closer now she really decided to show her strength and dove close to 1000 feet back down. Shane again did a great job and worked the fish all the way back in and with my help we were able to get her all the way to the boat. On her last burst of speed, she had gotten tail wrapped and we were pulling her in backwards. A quick dart shot and two gaffs secured, she was finally ours. By pulling her in backwards, I could see the size of her tail and knew my original estimate of 250 pounds was way off. Once we pulled her over the gunnel, it was clear that this was a 400 pound fish and she measured out at 91 inches LJFL and 142 inches overall. With a girth of 60 inches the formula weight puts her at 409 pounds. When we got back to the dock and steaked her out, she had 21 squid in her stomach as well as a tinker mackerel and two cuttlefish. No wonder she was that big.

I know every trip cannot be like this one, but unless you go, you will never have a trip like that. And although every trip does not produce a trophy fish like that, know that my effort will be at the highest level every time. I have been catching swords for 20 years and they are one of my favorite fish to catch. A big swordfish will test the anglers, the crew and the captain to its fullest. I thoroughly enjoy that challenge and although sometimes the fish win, with a good crew and angler, you will up the odds and win more often.

October is over ¾ of the way booked with lots of swordfish trips and a couple of trips to Bimini for wahoo fishing, which by the way, I heard they are already biting. Book your trips now before October is fully booked and lets go catch that fish of a lifetime! 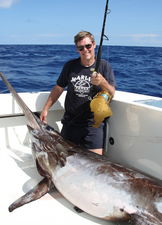