In the past two weeks we have done mostly sailfish trips but also did one day time swordfish trip and after I write this report I will be heading down to the boat to do our first evening swordfish trip of the year as well. The sailfishing has definitely gotten better and yesterday we had our best day of the year. We went 11 for 14 on the sails and also caught a half dozen mahis. My client, Kevin from Mass., has been fishing with me for about 8 years and although we always caught sailfish on our trips, we never hit the jackpot. Our previous best day was 4 sails in one day. This year a buddy of his tagged along and the conditions were perfect. We caught plenty of bait and headed out to the edge to be greeted with blue water and strong north current. There was a decent breeze to keep the kites going and there was plenty of bait showers around indicating that there were predators in the area. Shortly after setting up, we hooked a quad (4 sailfish on at once). We landed two of them. Then we had doubleheaders, singles and a tripleheader to end the day with 11 sailfish releases. It was a great day with a great client. As I mentioned we also caught some mahis and the day before this trip, we caught some real nice mahis including a big bull dolphin that weighed 42 pounds on the scale. We also caught a 20 pounder and a smaller one that day as well as three sailfish. That day while I was up in the tower, I saw a huge yellowfin tuna, with his entire sickle fin streak across the water in between or long bait and middle bait. This time last year, we had already caught two big yellowfins, so hopefully this is a sign.

The one daytime swordfish trip we did was also successful. I fished with another good client, Paul, who really likes the challenge of a big fish and luckily we caught a nice swordfish in the 275 pound class. We started the day with one tremendous bite in the morning. The rod tip twitched and then bent over double and line stated screaming off the reel with the fish racing on the bottom. Unfortunately that lasted about a minute and then the hook pulled. Daytime swordfishing is not like sailfishing where you expect a lot of bites so having one good bite in the day is sometimes all you may get. Checking with the moon charts, the moonrise was at 1:30 pm or so, so I figured we may have one more shot around the moonrise. About 1pm, the rod tip bounced we teased the fish and got a solid hookup. The fish fought hard the whole way up but the real battle began after the fish was boated and then decided she did not like the Double D. Luckily she didnt damage the boat or hurt anyone, but one day when you are fishing with me, remind me to tell you the story of the swordfish that went berserk on the deck.

Although I have not put in any amount of time to chasing cobias in the channel, there have been a few boats that have done well. Hopefully we will get the opportunity to do that soon. March is about halfway booked up and April is almost ¾ of the way full. With sailfishing improving and I truly do believe it will remain good until the end of the season, now is the time to book that trip on the edge. As we approach spring, not only will sailfishing remain strong, but we will start seeing more consistent action with kings, mahis and blackfin tunas. We actually did catch a nice 30 pound blackfin a few days ago, so maybe it will be an early start to their season. So go ahead and give me a call and lets get that trip set up before the season is over! 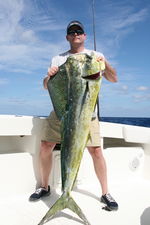