Sailfishing has finally picked up and we had some pretty good days in the past few weeks. Our best day we caught 8 sailfish and have been averaging 3 to 5 a day. We finally got blue water and have had plenty of north current to go with it. We are also seeing packs of sailfish moving through and hooking multiples has become the norm the past few weeks. The only issue we have had has been an absurd amount of wind the past 5 days, which has kept us on the dock. The wind is finally forecasted to die down tomorrow and we will be out there to see what is biting. 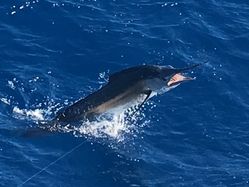 Two weekends ago we fished the Sailfish Challenge. This tournament is based out of three inlets (Miami, Hillsboro and Palm Beach), which makes for a very big boundary and a bit of decision-making as to where you are going to fish. For a week or so before the tournament the sailfishing in Miami was red hot, but the day before the tournament started, the fishing in Miami slowed down, so we elected to leave out of Hillsboro and fish up to the north. We were greeted with no wind but blue water and north current. We caught 3 sailfish that day and were somewhere in the middle of the pack. The next day we started off with two sails that instantly moved us to 3rd place. We missed a fish after that (that fish cost us) and then the bite died down. We moved farther south and at the end of the day we caught two more and missed one. Our seven fish total got us 5th place out of 70 something boats. The fish we missed in the morning would have given us 8 sailfish which would have moved us into 2nd place overall and 2nd place in the dailies. Although we still did very well, it just goes to show you that in a tournament every fish is so critical. This weekend we have another sailfish tournament so wish us luck!

Besides sailfish, there have also been some decent size mahis around, quite a few small yellowfin tunas (rare for our waters), some blackfin tunas and kingfish. It has been a nice mixed bag, which should carry on well into spring. 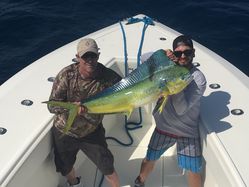 March is almost completely booked although I still have some openings during the last week of March and have openings in April as well. Call now and lets set up that trip and catch fish while they are biting.